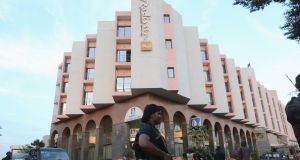 Islamist gunmen stormed a hotel in Mali’s capital Bamako yesterday, killing more than 20 people after taking 170 hostages, including many foreigners, in a day-long siege. The former French colony has battled rebels linked with Islamist militants for years, and beat back jihadis linked to al-Qaeda in the northern desert with French military help in 2013. The dramatic assault highlights concerns that – in the wake of attacks in Paris – the west African jihadi threat remains potent and foreign nationals may be targets.

Malian special forces supported by UN peacekeepers went room to room at the Radisson Blu pursuing the gunmen, who were believed to be holed up on the top floor, said Olivier Salgado, a United Nations mission spokesman.

Reuters news agency quoted a UN official saying that peacekeepers aiding the Malian soldiers had seen 27 corpses littering two floors. Interior minister Salif Traore, announcing the end of the siege on state television, said 76 people had been freed – leaving many of the hostages unaccounted for.

The minister said two attackers had been killed, but last night Malian forces were still trying to dislodge an unknown number of gunmen still in the hotel, Reuters quoted the security ministry as saying.

Al-Mourabitoun, an African jihadist group based in northern Mali and affiliated with al-Qaeda, said it was behind the attack, although the claim could not be verified. Some of the group’s followers are loyal to veteran al-Qaeda fighter Mokhtar Belmoktar.

Virginia Comoli of the International Institute for Strategic Studies in London cast doubt on any links with Isis, responsible for the Paris attacks, saying the group’s allegiance is more likely to lie with al-Qaeda’s regional affiliate, al-Qaeda in the Islamic Maghreb. “In Mali, Islamic State in particular does not seem to have much traction,” she said.

She and other analysts also dismissed any links between yesterday’s attack and the Paris assault, saying planning for this attack would have begun far earlier. They [radical Islamist groups] may want to put pressure on Bamako,” says Jean-Herve Jezequel, an analyst of the Sahel region for the International Crisis Group. “It’s also a way to show that the French military solution for Mali is not functioning and has not been successful in eradicating the radical groups.”

The attack began early yesterday when gunmen armed with AK-47 rifles stormed the hotel. The hotel is popular with foreigners and those inside were reported to include US, Turkish, Chinese, Belgian and French nationals.

Reuters reported that some hostages had been released after reciting verses of the Koran. A Guinean singer who was among those taken hostage told Reuters he heard attackers speaking English. “I heard them say in English, ‘Did you load it?’, ‘Let’s go’,” said Sékouba ‘Bambino’ Diabate, who was freed by security forces.

French president François Hollande offered his support to Mali: “We must once again stand firm in the face of this barbaric presence.” France’s national gendarme service sent some 50 elite police troops to Bamako.

Mali has struggled to root out the remnants of an al-Qaeda linked insurgency since a French-led military intervention in 2013 pushed militants out of the northern territory they seized. – (Copyright The Financial Times Limited 2015)