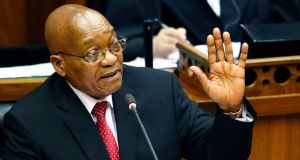 Three legal cases taking place in South Africa in September look like ending the political respite President Jacob Zuma has enjoyed since a no-confidence vote tabled against him in parliament in early August was narrowly defeated.

The outcome of court proceedings already under way in KwaZulu-Natal province could be the biggest game-changer in the race to succeed Mr Zuma as African National Congress (ANC) president in December’s elective conference.

A second case due to begin at the constitutional court on September 5th will determine whether parliament must institute an investigation into the president for violating the constitution and his oath of office following the scandal around upgrades to his rural Nklandla home.

And finally, on September 14th, the supreme court of appeal will hear Mr Zuma’s and the National Prosecuting Authority’s (NPA) appeal against a 2016 order from a lower court that 783 corruption charges be reinstated against him.

The charges of fraud, corruption and racketeering originally arose in 2005 from allegations that Mr Zuma accepted bribes linked to a multibillion-dollar arms deal involving the state in the late 1990s.

They were dropped shortly before Mr Zuma became president for the first time in 2009. The main opposition Democratic Alliance, which has been fighting to have the charges reinstated since then, maintains the NPA acted irrationally – and therefore unlawfully – by withdrawing the charges.

In KwaZulu-Natal, the ANC’s former provincial leader Senzo Mchunu has taken legal action to have the results of the party’s 2015 elective conference there declared null and void, claiming the outcome was rigged in favour of the current ANC leader in the province, Sihle Zikalala.

The latter is a staunch ally of Mr Zuma’s, while the former is said to support ANC presidential hopeful and the country’s deputy president, Cyril Ramaphosa, and his bid to become the party’s next leader.

If the Pietermaritzburg high court declares Mr Zikalala’s victory null and void it will throw internal ANC politics in KwaZulu-Natal into disarray ahead of December’s crucial conference.

The ANC in KwaZulu-Natal has until recently resolutely stood behind Mr Zuma, who is from the province. However, the numerous corruption scandals that have undermined his presidency have begun to dilute his support base even there.

KwaZulu-Natal is where the ANC enjoys its strongest support, so to win the party presidency, a candidate must secure significant support from its branches in the province.

Using 2012’s elective conference as an example, of the 4,500 voting branch delegates from the nine provinces that were in attendance, 974 were from KwaZulu-Natal – just over 21 per cent of the total.

If Mr Ramaphosa’s allies win the court case, it will be a major setback for Mr Zuma’s preferred candidate to take over from him as party president, his ex-wife Nkosazana Dlamini-Zuma. Mr Zuma is said to want her to win as he believes she will protect him from future prosecutions that may arise.

The presidential race appears extremely close and no candidate can win without significant support from KwaZulu-Natal, so a change at the provincial executive level could swing the outcome.

The Economic Freedom Fighters’ (EFF’s) case at the constitutional court relates to Mr Zuma’s failure to implement the recommendations contained in the public protector’s investigation into the unlawful upgrades made to his Nkandla home, which cost millions of euro in taxpayers’ money.

The EFF wants the court to declare that the speaker of parliament, Baleka Mbete, did not sufficiently hold Mr Zuma accountable for violating the constitution over Nkandla and to direct her to take the steps necessary to do so.

Political analysts say that if Ms Mbete is forced to launch a parliamentary investigation into Mr Zuma’s misconduct, it could be used as a first step to launch impeachment proceedings to remove him from office.

If Mr Zuma and the NPA’s case at the supreme court of appeal is unsuccessful, the chances of the president having his day in court to face the 783 corruption charges increases significantly.

While he could appeal a ruling that goes against him to the constitutional court, that would be his last legal avenue to have the charges withdrawn.

Although Mr Zuma’s reign is coming to an end in a few months’ time, the chances of him being allowed to go quietly into the night appear rather slim.