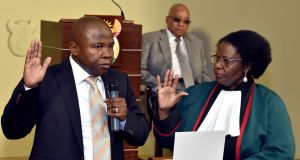 The sacking of South Africa’s finance minister Nhlanhla Nene by President Jacob Zuma has been widely condemned, with critics claiming he lost his job for trying to stop elements of government from over-spending. In a statement released by the presidency following the announcement late on Wednesday, Mr Zuma said the finance minister had been redeployed to “another strategic position”, which he said would be made public in due course.

The president held back from explaining his decision and there has been no comment made by Mr Nene as yet, which has prompted much speculation about what caused the cabinet shuffle.

Economic experts have warned the move will only make South Africans poorer as inflation will rise on the back of investor uncertainty. The local currency, the rand, has already plunged to near record lows against the euro, US dollar and British pound following the shock news.

Mr Zuma has appointed African National Congress MP David van Rooyen as the new finance minister, but his ability to lead such a crucial portfolio is being questioned, as before entering parliament in 2009, much of his experience was in local government. He was chairman of the parliament’s finance committee and, before becoming an MP, he was the mayor of Merafong, a town in Gauteng province.

With South Africa on the verge of a financial crisis, many analysts and opposition parties have described Mr Zuma’s decision to remove the respected Mr Nene from such an important ministry as unforgivable.

The move comes just days after two ratings agencies – Fitch and Standard & Poor’s – warned that South Africa was on the verge of being reduced to junk status. If such a downgrade occurs, the cost of borrowing for South Africa’s government will rise significantly.

In the months leading up to the cabinet reshuffle, Mr Nene clashed with a number of the president’s allies over budget allocations and how state enterprises were run. Many observers believe these quarrels have led to his downfall.

Last week Mr Nene’s then ministry told South African Airways chairwoman Dudu Myeni, a close friend of the president who also runs the Jacob Zuma Foundation, it would not bail out the national airline again so it could buy new aircraft rather than lease them.

He also put the brakes on the purchase of a new top-of-the-range government jet for the presidency and, in his latest budget, refused to allocate the billions of rand needed to fund a new nuclear power programme that the president is trying to speed up.

The Economic Freedom Fighters called the new appointment “a sign of a serious pathological crisis in the leadership and direction of the country”, while the main opposition Democratic Alliance said the move was “irrational and reckless”.