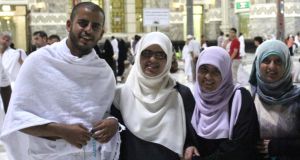 Ibrahim Halawa with his sisters Fatima, Omaima and Soumaya, who have been detained at the security forces headquarters in the Tora district of Cairo. Photogrzaph: PA Wire

Egyptian media today reported that four Irish citizens are among nine foreigners to be jailed for up to 15 days pending investigation into charges including attempted murder, arson, belonging to an armed gang, and possession of arms and explosives.

The reports claim that the nine foreigners, who also include Canadian, Turkish and Syrian nationals, deny all charges which relate to the siege of Cairo’s al-Fath mosque at the weekend.

While the four Irish citizens were not named by the media outlets, it is understood they are the Halawa siblings.

A spokesman for the Department of Foreign Affairs said it was aware of the media reports in Egypt. “Unfortunately the situation in relation to legal proceedings against [the Halawas] is unclear at present,” he said.

The reports emerged after a representative from the Irish embassy in Cairo was granted consular access to four Irish siblings detained after security forces stormed the mosque on Saturday.

The diplomat met Omaima Halawa (21), her sisters Fatima (23) and Soumaya (27) and brother Ibrahim (17) at the security forces headquarters in the Tora district of Cairo this afternoon. The Halawas are the only Irish nationals being detained in in Cairo.

All four are being held together at the facility. The diplomat “spoke freely to them in person for an extended period of time” and passed on personal items from their mother who is in Cairo, according to sources. “They are upset about being in detention,” said one source.

The Halawa sisters appeared in good health but Ibrahim Halawa had a bandaged hand. He told the visiting diplomat that the injury was a result of a gunshot wound sustained during the mosque siege.

The Halawa family moved to Ireland 18 years ago. Their father, Sheikh Hussein Halawa, is imam at the Islamic Cultural Centre of Ireland, which is located in Clonskeagh, Dublin.

The Halawa sisters were born in Egypt and their brother was born in Ireland. All are Irish citizens and, according to their family in Dublin, all travelled to Egypt on Irish passports.

The siblings were on their annual family holiday to Egypt when they decided to take part in protests against the military overthrow last month of Mohammed Morsi, Egypt’s first democratically elected president.

The Halawas joined demonstrations on Cairo’s Ramses Square on Friday, the day the Muslim Brotherhood called for rallies against the ousting of the Brotherhood’s Morsi and the deadly security operation last Wednesday to evict his supporters from protest camps in the city.

Sheikh Halawa said he advised his children to seek refuge in the nearby al-Fath mosque after clashes that eventually claimed the lives of scores of people erupted in Ramses Square. Gunfights took place around the mosque as hundreds of Morsi supporters barricaded themselves inside. Security forces eventually overran the complex.

The Halawa siblings had also taken part in the weeks-long sit-in at Rabaa al-Adawiya, one of two encampments broken up by security forces last week with the loss of more than 600 lives.