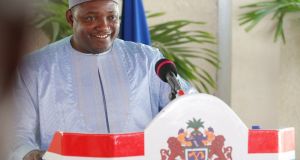 Gambia is set to rejoin the British Commonwealth under new president Adama Barrow.

UK foreign secretary Boris Johnson, who arrived in the West African nation for talks on Tuesday, said he was “very pleased” by the announcement, which could lead to the country’s re-admittance to the group within months.

Gambia left the Commonwealth in 2013 under former leader Yahya Jammeh, but he went into exile in January after international pressure to accept his election defeat.

His democratically elected successor, Mr Barrow, has signalled that the country will return to multinational bodies, with Gambia reversing its process of withdrawal from the International Criminal Court, as well as announcing its intention to rejoin the Commonwealth.

Mr Johnson will become the first British foreign secretary to visit Gambia, and he will also travel to Ghana for talks with its leader, Nana Akufo-Addo during his two-day trip.

He said: “I’m delighted to be the first foreign secretary to visit Gambia this week and delighted to have a chance to meet the newly elected president Barrow and president Akufo-Addo of Ghana. Their elections highlight the continuing strengthening of democracy in West Africa.

“I am also very pleased that Gambia wants to rejoin the Commonwealth and we will ensure this happens in the coming months. The strength of our partnerships show that global Britain is growing in influence and activity around the world.”

During the visit, Mr Johnson will highlight the strength of the Commonwealth as the UK seeks to build on its traditional alliances in the lead-up to the Brexit vote.