Leading official raises death toll and says there could be 10,000 new cases of Ebola a week 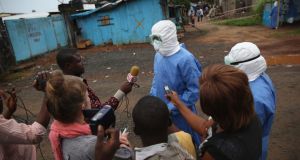 A doctor outside the JFK Ebola treatment center speaks to journalists in Monrovia, Liberia. The UN health agency is still focused on trying to isolate sick people and provide treatment as early as possible. Photograph: John Moore/Getty Images

The death rate in the current Ebola outbreak has increased to 70 per cent, a World Health Organisation (WHO) official has said.

WHO assistant director-general Dr Bruce Aylward said the 70 per cent death rate marked “a high mortality disease” in any circumstance.

He added that the UN health agency is still focused on trying to isolate sick people and provide treatment as early as possible.

Previously, the WHO had said the death rate was around 50 per cent.

The organisation also said there could be up to 10,000 new cases of Ebola per week within two months.

Dr Aylward said if the response to the Ebola crisis is not stepped up within 60 days, “a lot more people will die” and there will be a huge effort required on the ground to deal with the spiralling number of cases.

The official added that for the last four weeks, there have been about 1,000 new cases per week, though that figure includes suspected, confirmed and probable cases.

He said WHO is aiming to have 70 per cent of cases isolated within two months to reverse the outbreak.

The WHO increased its Ebola death toll tally to 4,447, nearly all of them in West Africa, and the group said the number of probable and suspected cases was 8,914.

Sierra Leone, Guinea and Liberia have been hardest-hit.

Dr Aylward said the WHO was very concerned about the continued spread of Ebola in the three countries’ capital cities, Freetown, Conakry and Monrovia. He noted that while certain areas were seeing cases decline, “that doesn’t mean they will get to zero”.

He said the agency was still focused on trying to treat Ebola patients, despite the huge demands on the broken health systems in West Africa.

“It would be horrifically unethical to say that we’re just going to isolate people,” he said, noting that new strategies like handing out protective equipment to families and setting up very basic clinics — without much treatment - was a priority.