Congo opposition leaders vow to unify ahead of elections 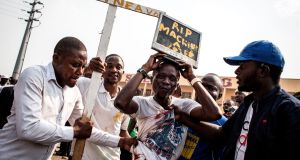 Opposition supporters carry a cross and computer screen with the words “RIP voting machine” on it, during a rally. Photograph: John Wessels/AFP/Getty Images

Opposition leaders in the Democratic Republic of Congo have vowed to join forces to end President Joseph Kabila’s 17-year hold on power, accelerating a race against time to find a unity candidate before December elections.

Mr Bemba visited Congo for the first time in a decade in August. “I read the faces of the people and they are expecting change,” he said in an interview at his house outside of Brussels. “It was hope for something different.”

But he returned to Belgium due to concerns for his safety. The trip to Congo followed his release from the International Criminal Court, where his conviction for crimes committed by his troops in Central African Republic was overturned this June.

Congo, a volatile country of sprawling forests and rich copper mines, has not seen a democratic transfer of power since independence in 1960. Mr Kabila took office in 2001 in the middle of a brutal civil war after his father was assassinated.

He negotiated a difficult peace agreement in 2002 and won elections in 2006 and 2011. But continued insecurity, a lack of economic development and rampant corruption has seen his popularity wane.

Elections that should have seen Mr Kabila step down were scheduled in 2016 but the votes were delayed and the president held on to power, sparking protests and a spike in militia activity across the country.

Mr Bemba said that in the 10 years he was outside of the country, little had changed. “In Kinshasa, the capital, you still have places with no road access to your home, no access to electricity, where houses flood and people die when it rains.”

He remains hugely popular in the west of the country, but having been excluded from the presidential vote – due to an ICC conviction for witness tampering – he says he will throw his political weight behind another candidate.

“I will give him all my support and, if it is a fair, transparent election, make him win,” Mr Bemba said.

Mr Katumbi, the former governor of the copper-rich Katanga region and owner of Congo’s most successful football team, is also promising to put his significant political and financial resources behind a common candidate.

“I have been talking about a single opposition candidate since 2015,” Mr Katumbi said from New York, where he was lobbying for international support. “The population will have the last word.”

Unity is vital if Congo’s opposition wants to defeat Mr Kabila’s anointed successor, Emmanuel Ramazani Shadary. While the former minister of interior lacks Mr Katumbi or Mr Bemba’s popularity, he will benefit from the ruling party’s deep resources and his chances would be sharply improved if the opposition fielded multiple candidates who split the one-round vote.

Last week Mr Bemba and Mr Katumbi addressed the crowd by telephone at a rally in Kinshasa with five other opposition leaders, including Felix Tshisekedi, the head of Congo’s biggest opposition party. The men restated their support for a single opposition candidate but still demurred from picking one.

One reason for the opposition’s hesitation is uncertainty over whether the vote will take place in December. Though Mr Kabila told the UN General Assembly last week the polls will proceed, the country’s electoral commission faces a huge logistical test.

Congo is the largest country in sub-Saharan Africa and Mr Kabila has shunned offers of support from the UN and other international partners.

The electoral commission also plans to roll out tablet-like digital voting machines, but only a fraction of the country has access to electricity and Congolese voters will receive no training on the devices before polling day.

Mr Bemba and Mr Katumbi say the government intends to use the machines and a lack of international oversight to manipulate the vote and have demanded that the devices are withdrawn. The electoral commission insists the machines will cut costs.

If nothing changes, the opposition will face a decision on whether to boycott or participate in an election it says is likely to be flawed. “That is a big question,” Mr Bemba said. “We will ask for more transparency. If we don’t get it, I don’t know, it’s a collective decision.” – Copyright The Financial Times Limited 2018