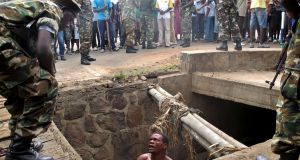 A man begs for help from the military as he stands in a drain where he had hid himself to escape a lynching by a mob at the Cibitoke district of Burundi capital, Bujumbura last May 7, 2015. Photograph: Aymeric Vincenot/AFP/Getty

Burundi is on the verge of civil war because of a campaign of political repression in which at least 400 people have been killed and almost 3,500 arrested, the United Nations High Commissioner for Human Rights said on Thursday.

The surge of violence in Burundi has unnerved a region that remains volatile two decades after a genocide in neighbouring Rwanda. The country’s current political crisis pits supporters of President Pierre Nkurunziza against opponents who say his re-election in July for a third term violated the constitution.

Tensions have been running particularly high since gunmen attacked military sites in the capital Bujumbura last Friday. Scores of people died in the fighting.

“Burundi is at bursting point, on the very cusp of a civil war,” Zeid Ra’ad al Hussein told a special session of the UN Human Rights Council in Geneva.

“We have documented 312 killings since public demonstrations against a possible third presidential term (for Nkurunziza) began, including 19 children. Over the last bloody weekend in Bujumbura, government figures indicate that another 87 people were killed, but figures we have received from other sources are considerably higher.”

He called for a robust response by the international community, including travel bans and asset freezes, and said Burundi’s borders should be closely monitored, perhaps by drones, to stop the reported flow of weapons into the country.

“The time for piecemeal responses and fiddling around the edges is over,” he said.

The United States called for Thursday’s Council session, proposing that Zeid’s office should send a team to investigate the situation on the ground in Burundi.

Zeid said the International Criminal Court should also be involved, a call backed by the UN special adviser on the prevention of genocide, Adama Dieng, who said Burundi appeared to be “on the verge of a descent into violence that could escalate into atrocity crimes”.

The international community should consider establishing a commission of inquiry to investigate human rights violations, with a view to prosecuting those responsible, Dieng said.

“No one should underestimate what is at stake. A civil war between 1993 and 2005 cost over 300,000 lives and displaced more than one million people,” said Dieng.

Burundi’s 12-year civil war pitted rebel groups of the Hutu majority, including one led by the current president Nkurunziza, against what was then an army led by the Tutsi minority.