At least 17 killed in Islamist attack in Mogadishu 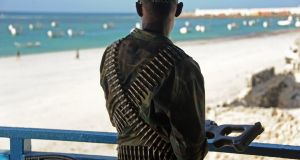 A Somali soldier looks at the Lido beach in Mogadishu following an overnight attack on a beachfront restaurant. Photograph: Mohamed Abdiwahab/AFP/Getty Images

At least 17 people were killed in the Somali capital of Mogadishu when five Islamist gunmen set off bombs and stormed a popular beachfront restaurant late on Thursday, Somali police said.

Al-Shabab, a militant group aligned with al-Qaeda, said its fighters set off two car bombs at the Beach View Café on Mogadishu’s popular Lido beach and engaged in a gun battle for hours with government troops.

“The operation ended at 3am last night and at least 17 civilians were killed,” police officer Osman Nur told Reuters on Friday.

Somalia’s security minister, Abdirizak Omar Mohamed, said four of the gunmen were killed and one was captured alive.

“The government forces rescued hundreds of civilians who were dining there,” he told state-run Radio Muqdisho.

A second blast, which witnesses said echoed around the city centre, struck about an hour later as government soldiers laid siege to the restaurant.

Al-Shabab, which regularly targets hotels and restaurants in the capital, seeks to topple the western-backed government and impose a strict version of Islamic law across Somalia, a nation racked by conflict since the outbreak of civil war in 1991.

The group at one point controlled most of Somalia, including the capital Mogadishu, but in recent years an African Union peacekeeping force has wrestled most of that territory away from the group.

Somalia’s prime minister urged the public to remain calm and said the attack on a civilian target was a desperate move by a group facing annihilation.

“Let it remain clear that [the attack] will not hamper the commitment of my government and that of our people to resurrect Somalia,” Omar Abdirashid Sharmarke said in a statement.

The attack came a week after al-Shabab overran an African Union base near the Kenyan border, claiming that they had killed more than 100 Kenyan soldiers.

Kenya has not commented on the death toll.