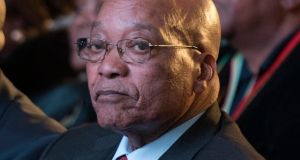 President Jacob Zuma: while there were a number of factors behind the ANC’s electoral decline the unpopularity of Mr Zuma, who is accused of corruption and beset by scandals, was high among them. Photograph: Herman Verwey/AP Photo)

The African National Congress (ANC) has taken collective responsibility for the party’s poor results in the local elections rather than blaming the unpopularity of its leader Jacob Zuma among urban voters.

Following a four-day meeting of the ANC’s national executive committee held to discuss why the party lost control of four major “metros” in the August 3rd poll, secretary general Gwede Mantashe told reporters that removing Mr Zuma as party leader was not discussed.

“There has been a negative narrative around a number of issues,” Mr Mantashe said on Sunday night in relation to what was discussed at the meeting. “There was no proposal that the president step down.”

The ANC slipped to its worst election performance in the post-apartheid era, recording a slim majority of just under 54 per cent nationally, a decline of 8 per cent points on the support it received in national elections two years ago.

While there were a number of factors behind the ANC’s electoral decline – including high unemployment, poor service delivery and party corruption – the unpopularity of Mr Zuma, who is accused of corruption and beset by scandals, was high among them.

Mr Mantashe unveiled a 14-point plan to reverse the party’s decline ahead of the 2019 national polls, which included a strategy to “re-engineer” the organisation.

“The ANC believes that arresting the electoral decline requires the ANC to immediately and courageously embark on bold strategies to re-energise our structures,” Mr Mantashe said.

With just four days to go before all of South Africa’s municipal councils are legally bound to hold their first meeting, there is still no official word of what coalitions might emerge in the 72 hung councils nationwide.

With most small parties putting Mr Zuma’s resignation as ANC leader – and by extension as South African president – as a condition of their support for the ruling party, it seems likely the former liberation movement will enter opposition politics for the first time. But the future of Johannesburg, Pretoria and Port Elizabeth are still up in the air as the Economic Freedom Fighters’ and smaller parties deliberate on whether to side with the main opposition Democratic Alliance (DA), the big winners in this election.

If no coalitions are agreed, the DA could form minority councils where it won the poll, but they would be very difficult to govern effectively.

1 ‘Frustrated and angry’: Thousands march in Dublin to protest death of George Floyd
2 Coronavirus: One more death in Republic as expert warns house parties are ‘disaster’ for containment
3 Covid-19: Easing of restrictions ‘unlikely’ to be speeded-up
4 Couple injured in shooting incident at farm in Co Waterford
5 US braced for more protests after autopsy shows George Floyd asphyxiated
Real news has value SUBSCRIBE