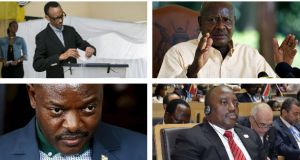 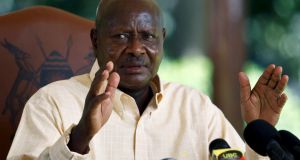 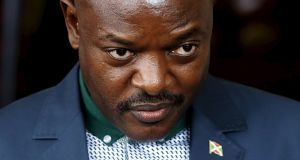 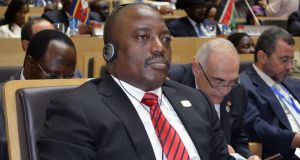 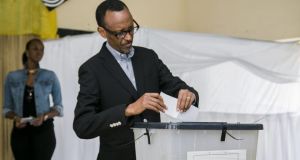 Rwanda’s president Paul Kagame voting in Kigali on December 18th in a referendum to amend the constitution enabling him to rule until 2034. Photograph: Cyril Ndegeya/AFP/Getty Images

The recent decision by Rwanda’s electorate to allow Paul Kagame to seek a third term in office – and Kagame’s confirmation last Friday that he will do so – underscores a re-emerging trend in Africa that has seen constitutional term limits for presidents come under threat.

The December 17th referendum saw Rwandans vote by a majority of 98 per cent in favour of amending the constitution so the former rebel leader can potentially remain president until 2034 – nearly 3½ decades after he officially came to power.

The amendment cut the presidential term from seven years to five and maintained the two-term limit. But it also stipulated that the new rules will not come into effect until 2024 and that Kagame can run for a third seven-year term in 2017 and then stand for two further five-year terms in accordance with the amended constitution.

“You requested me to lead the country again after 2017. Given the importance and consideration you attach to this, I can only accept,” Kagame said in a New Year televised address to the nation.

The original two-term limit for presidents was enshrined in the constitution Rwanda adopted in 2003, when Kagame was three years into his first stint as president.

Since the Rwandan genocide in 1994 that left an estimated 800,000 Tutsi and Hutu moderates dead, the country has made remarkable progress in developing its economy and rebuilding the nation.

Kagame joins a growing list of African leaders who have sought to stay in power by rewriting their constitution’s rules, although most of these do not have the support of the electorate to do so.

The introduction of term limits for presidents in Africa began in the early 1990s as a response to the continent’s first wave of post-independence leaders who decided to cling to power. Yet in many cases those who oversaw the legislative amendments tried to have them changed years later.

It was one of Idi Amin’s successors as president of Uganda, Yoweri Museveni, who set the precedent for the current crop of rulers to undermine the two-term rule.

In 1986, not long after taking power, he wrote that the problem in Africa was that leaders wanted to overstay their welcome. But in 2005 he altered the country’s constitution to allow himself a third term. Aged 71, he is now serving a fourth.

Last year saw Kagame’s counterparts in neighbouring Burundi and Congo change their constitutions to stay in power, while it is unclear if leaders in the Democratic Republic of Congo and Benin will step down this year when their two terms are up.

Burundi’s president Pierre Nkurunziza’s insistence on taking up a third term has prompted the United Nations to warn that the country is on the verge of a new civil war. His decision to do so, opposition parties and civil society groups say, violated the constitution’s two-term limit, as well as the 2005 Arusha accord that ended the country’s last internal conflict.

Since Burundi’s presidential poll last July, which was boycotted by the opposition, hundreds of Burundians have been killed in ongoing unrest and thousands more displaced. Last month the African Union proposed sending a peacekeeping mission to the country to stabilise the situation but it was rejected by the government as an “invasion force”.

“Burundi is clear on the matter: it is not ready to accept an AU force on its territory,” the country’s deputy presidential spokesman Jean-Claude Karerwa said on December 20th.

In April 2015 president of Congo-Brazzaville Denis Sassou N’Guesso – in power for over three decades – also announced he wanted to alter the constitution. He held a referendum in October in which he won approval to change electoral rules so he could stand for a third term.

Will of the people

Last January, however, his tentative attempts to overturn the term limit were met with riots. International observers have urged Kabila to commit to standing down this year. He has yet to publicly do so.

But the will of the people is not always defeated in Africa. In October 2014 President Blaise Compaoré of Burkina Faso was ousted in a popular uprising after trying to extend his 27 years in office by removing the two-term limit inserted in the constitution in 2000.

Two years earlier, in 2012, Senegal’s 85-year-old president Abdoulaye Wade, who brought in two-term limits, argued that they did not apply to him as his first term occurred before the law was adopted. The constitutional council allowed him to stand for a further term, which prompted thousands of citizens to take to the streets to oppose the move.

Undeterred, Wade contested the poll but was defeated and relinquished power.

Notwithstanding this third-term trend, many African countries have witnessed peaceful and democratic leadership transitions in recent years.

Nigeria’s president Goodluck Jonathan handed over power in March last year after he was defeated at the ballot box – the first time in the country’s history a sitting president had lost an election. In Mozambique Armando Guebuza also stood down following the October 2014 elections.