With warmth and comic genius, she was marked early on for the stage 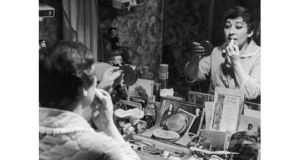 Maureen Potter, the actress, comedian, singer and dancer who died on April 7th, was for many years Ireland's best-loved popular entertainer, both with the public and with her fellow-professionals.

Born in 1925, a fifth-generation Dubliner, she was the daughter of James Benedict Potter, a commercial traveller who died when she was only seven, and of Elizabeth Carr.

Marked for the stage from an early age, she would say that she only agreed to go to St Mary's National School in Philipsburgh Avenue in Fairview, the street where she lived, on condition that she could attend dancing classes.

Enrolled in the dancing school run by Jewel Byrne in the local CYMS hall, she showed a precocious talent that made her All-Ireland junior dancing champion two years later, at the age of seven. From there she went to the classes run by Connie Ryan, in the city centre, which were the seedbed for Connie Ryan's Kiddies, a troupe of juvenile dancers who performed in pantomimes and variety shows in all the major theatres of Dublin.

Of all her many talents, dancing was the one she claimed to love best, and years later she was particularly pleased when she danced in one of her shows with Brian O'Connor, the champion traditional Irish dancer.

Maureen Potter started to perform in variety shows and pantomimes shortly thereafter and was to recall: "My first professional engagement was when I was nine in the Queen's Theatre, where I was paid the princely sum of seven shillings and sixpence. I remember making my Confirmation and rushing to the Queen's for the first matinee".

In 1935 she appeared as a fairy in a pantomime with Jimmy O'Dea, then Ireland's foremost comedian, and performed a sketch which brought the house down in which she mimicked Alfie Byrne, the popular lord mayor of Dublin.

She was spotted performing by English impresario and dance-band leader Jack Hylton on one of his visits to Ireland, and invited to do a number in his show. Billed as "the Pocket Mimic" because of her tiny stature (she was just under five feet), she was subsequently invited to join his troupe in its tour of England, Scotland and Wales.

Although she was only 12 years of age and too young to be allowed work legally, she pretended to be 14, using a birth certificate she had borrowed from a friend. That was the end of her formal schooling, but she was a highly intelligent person, always well read and well informed.

Of her lack of education, she said: "Education, perhaps, is something I missed by going on stage so early, but there is little else I really missed. I think I had a better childhood than many kids today who appear so confused with our modern society."

Her work with Hylton took her all over the variety theatres of Britain, and on one occasion to Nazi Germany, when she played before Hitler, Goering and Goebbels. Hitler did not come backstage after the show, but the other two leaders did, "with their fat wives" as she said. The cast were each given a wreath in commemoration of the visit, which her mother, who did not approve, threw in the bin when Maureen brought it home.

The outbreak of the second World War brought her back to Ireland, where she resumed working for Jimmy O'Dea and his company. The shows toured all over Ireland, and she described how the actors, who travelled in the back of an open lorry, would get down outside the towns in which they were to appear and brush the dust off their clothes. Then they would stroll into town, as if they had just got off the train, that being regarded as more respectable.

O'Dea, himself a master comedian, became her mentor. "I loved working with Jimmy O'Dea," she said, "and I had a unique relationship on the stage with him. He taught me my business. He's the one who taught me to be funny, he was the master of timing."

When she started she was one of the "feeds" who set up his jokes, but as time went on she became more of a partner to him, playing among many other parts the daughter of his celebrated Biddy Mulligan character and one of two comical Dublin "wans", Dolores and Rose.

She met her future husband, Jack O'Leary, an army officer, in 1943, and he would hear her lines when she was rehearsing. Gradually he began suggesting improvements and eventually became her main scriptwriter, writing her many solo items including the famous "Christy" numbers in which she played the ambitious mother of a naughty Dublin child.

They married in 1959 and, living in Clontarf, were to have two sons, John and Hugh. Although her work kept her busy, she enjoyed family life greatly after her long years of touring, being particularly fond of watching sport, mainly football and cricket.

Her career with Jimmy O'Dea was to continue until his death in 1965, and she appeared in his last show, the musical Finian's Rainbow. After that she took the lead in the annual pantomimes at the Gaiety Theatre and also in a series of summer revues, Gaels of Laughter, produced by Fred O'Donovan and directed by Ursula Doyle, Jimmy O'Dea's widow.

The shows packed the theatre for 15 years and featured most of the major comedians and popular singers in the country at that time, including Milo O'Shea, Danny Cummins, David Kelly, John Molloy, Patricia Cahill, Rosaleen Linehan, Hal Roach, Vernon Hayden, Des Keogh and Val Fitzpatrick.

Although best known for revue and pantomime, Maureen Potter made several notable appearances on the legitimate stage, in films and on television. The plays in which she appeared included a Hilton Edwards-Michael MacLiammoir production of The Informer, Shaw's Androcles And The Lion with Cyril Cusack, Arsenic And Old Lace, in which she co-starred with Siobhan McKenna, Sheridan's School For Scandal and Hugh Leonard's Moving and Da.

In 1986 she took the part of Maisie Madigan in Joe Dowling's production of O'Casey's Juno and the Paycock, which after opening at the Gate Theatre toured to Jerusalem and New York to great acclaim. She also appeared in the musical Annie at the Gaiety.

Although, like many actors of her generation, she preferred working on the stage to the screen, she appeared in several films and television shows. They included Ulysses and A Portrait Of The Artist As A Young Man, two versions of Joyce's novels, directed by Joseph Strick, and two John Ford films, Gideon's Day and The Rising Of The Moon.

On television she did a situation comedy series, Me And My Friend, with Rosaleen Linehan, and The Maureen Potter Show on television, which topped the TAM ratings in 1973. Almost her final public appearance was when she made an appearance on The Late Late Show last January, celebrating 100 years of the Abbey Theatre.

Towards the end of her career she suffered greatly from aggravated arthritis in her hips and knees, probably brought on by her highly energetic dancing. As a result of this, she had to give up pantomime in 1987.

However, she worked on for several seasons in a very successful cabaret show at Clontarf Castle.

Maureen Potter received many awards and honours in her long career. In 1984 she was granted the freedom of the city of Dublin. Dublin University conferred an honorary degree on her in 1988, and in the same year she received an honorary Harvey's Irish Theatre Award for her services to Irish theatre.

She appeared at the Gaiety in 1996 to take part in a concert for the stage director Mai McFall, and in 1999 a special celebration of her life was staged in the same theatre, attended by the President, Mrs McAleese, who paid a tribute to her from the stage, and virtually all the luminaries of the Irish theatrical profession. In 2001 she was the first person to place her handprints in the walk of fame that was established outside the theatre with which her name will always be associated.

The quintessential Dubliner, Maureen Potter was loved not only for her warmth and comic genius, but also for her generosity. Without ever letting it be known she helped many a person down ontheir luck and, on stage, was always ready to share her great experience with younger performers.

Her final line in her shows was always: "If you liked the show tell your friends, and if you didn't, keep your breath to cool your porridge."