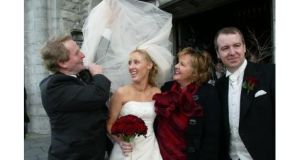 Fianna Fáil's and Fine Gael's political differences were left out in the cold in Galway yesterday, as more than 400 guests celebrated the marriage of the city's mayor, Cllr Brian Walsh (Fine Gael).

Councillors from both parties and Fine Gael party leader Enda Kenny and his wife, Fionnuala, were among guests at the occasion in Galway Cathedral. Cllr Walsh's union with Ms Fiona Flatley of Renmore, Galway, is the second such mayoral wedding in Galway in two years. County mayor Cllr Tim Rabbitt (FF) also got married while in office two years ago.

The couple intend to fly to Barbados for a fortnight's honeymoon next week.

How have other countries responded to concerns over the AstraZeneca vaccine? 09:42
Allardyce angry with VAR after ‘human error’ denies another goal 08:46
European shares pause near record high with eyes on US inflation data 08:18
Derek Chauvin trial: George Floyd was ‘a person everybody loved’, brother says 08:12
Just Eat Takeaway says Q1 orders up 79% to 200m 07:49