Walsh says other FG TDs agree over stance on abortion 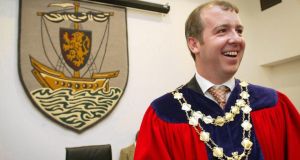 Brian Walsh TD: has indicated he will break with Fine Gael over abortion


The first Fine Gael Deputy to indicate publicly he will not support the Government’s proposed abortion legislation has said he believes other members of the parliamentary party will adopt the same stance.

Brian Walsh, a TD for Galway West, said yesterday he had no illusions about the consequences of his decision for his political career but said: “I have done what I believe is right.”

In an Irish Times survey of a large number of Fine Gael backbench TDs and Senators yesterday, a small number indicated publicly they will have huge difficulties supporting the legislation while as many as 10 indicated privately they have huge reservations about it. Many other Fine Gael Deputies and Senators have reserved their position until the Heads of the Protection of Maternal Life Bill is published. That is expected to take place after being approved at today’s Cabinet meeting.

Several TDs said privately that Mr Walsh’s decision had changed the dynamic on the issue for its parliamentarians. At a party meeting last week, Taoiseach Enda Kenny told TDs and Senators that a whip would be imposed and there would be no free vote.

One TD, speaking on condition of anonymity, said: “Brian Walsh’s decision to go overboard has changed all that. TDs who have spoken against the suicide clause will not be able to say they are bound by the party whip when one TD has already indicated he won’t support it in a vote.”

A number of other TDs said that the lobbying campaign from anti-abortion campaigners, already very active, has intensified over the past 24 hours as a result of Mr Walsh’s decision, as well as The Sunday Independent report on clandestine recordings of two Labour TDs, Aodhán Ó Ríordáin and Anne Ferris, both of whom said they supported further liberalisation of abortion laws.

Mr Walsh’s Galway colleague Senator Fidelma Healy Eames said yesterday that if there was any suicide clause in the Bill, she would not support it. “I have been saying this for a long time and my position is the same. I will wait to see the Bill but if there is a suicide clause, that is a line in the sand for me,” she said.

Mr O’Mahony said he had concerns about the inclusion of suicide and he was waiting to see what the legislation provided for, or did not provide for. “I sat through the Oireachtas committee hearings, and I have informed myself as much as possible on the issue, and I have not seen anything so far to allay my concerns on the suicide provision,’’ he added.

Ms Mulherin described as “arrogant and ignorant’’ the comments made by Mr Ó Ríordáin. She said the legislation would be discussed by the Fine Gael parliamentary party. “We are not lawyers; we are legislators for the common good,’’ Ms Mulherin added.

Others who are known to have expressed their concern about the inclusion of a suicide threat in the legislation are Minister of State Lucinda Creighton; Terence Flanagan; James Bannon; John Paul Phelan; and Senator Paul Bradford.

Teenager (17) attacked with samurai sword in Dundalk 17:57
Thousands march in Drogheda to ‘take back control’ from drug gangs 17:56
Valencia end Quique Setien’s Barcelona honeymoon 17:40
ASTI secondary teachers to ballot on strike over two-tier pay 17:38
FA Cup round-up: Southampton and Spurs to do it all again 17:34