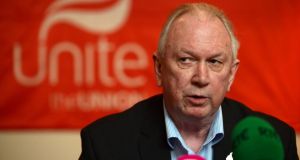 Unite regional secretary Jimmy Kelly. The union is the only one that has so far voted to reject the Haddington Road proposals. It represents a relatively small number of staff, about 6,000 mainly across the education, health and local authority sectors. Photograph: Cyril Byrne

The decision by gardaí and nurses to back the proposed Haddington Road deal means that the vast bulk of public service personnel have now agreed to be covered by its provisions which are aimed at generating paybill savings of €300 million this year for the Government.

Only one trade union, Unite, has so far voted to reject the new proposals and it represents a relatively small number of staff, about 6,000 mainly across the education, health and local authority sectors.

Balloting
However, the balloting process has not concluded – in some significant cases it has not yet started – and it is possible that the numbers formally opposing the proposed agreement could grow in the future.

For example, the union representing about 13,000 lower-paid civil servants will announce on Wednesday whether its members have accepted its recommendation to reject the proposals.

On the other hand the education unions, the Association of Secondary Teachers, Ireland (ASTI) and Teachers Union of Ireland (TUI), which appeared to reject Haddington Road last month without a ballot now seem set to consult members on the proposals.

Government perspective
Overall, from the Government’s perspective, it is in a far better place than two months ago when the public service unions decisively rejected the Croke Park II proposals for reducing the State’s pay and pensions bill.

In the weeks that followed the collapse of Croke Park II the unions were effectively given a choice; they could either accept a more benign deal brokered subsequently by the Labour Relations Commission or they could face more draconian measures under emergency legislation passed by the Oireachtas.

Members of unions that accept the Haddington Road proposals will still face cuts to earnings or diminished terms of employment.

However protections against compulsory redundancy or against being redeployed beyond a 45km radius, which were contained in the original Croke Park agreement will be maintained. Such staff will also receive their next due incremental pay increase.

Those who reject the deal face having the relatively harsher terms set out in the legislation imposed unilaterally by the Government.