Over 800,000 visitors in first year of operation 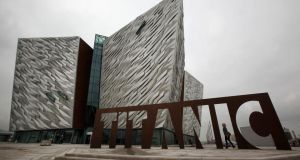 Titanic Belfast announced it has become the second most visited tourist attraction on the island. Photograph: Getty

Northern Ireland First Minister Peter Robinson hailed “the legacy of the most famous ship ever built” as Titanic Belfast announced it has become the second most visited tourist attraction on the island. The Titanic Visitor Experience recorded 807,340 visitors during its first year of operation, just behind the annual figures for Dublin’s Guinness Storehouse.

Speaking at an event at Titanic Belfast to mark its first anniversary, Peter Robinson was joined by Deputy First Minister, Martin McGuinness, who added that visitor numbers had exceeded all expectations for “the most fantastic building on the island of Ireland” that had now proved itself as “an outstanding European tourism success story”. It is estimated that the tourism generated by the building is worth some £55 million a year to the local economy.

Opened last year to coincide with the 100th anniversary of RMS Titanic’s maiden voyage, what has surprised most is the international appeal of the attraction with visitors coming from 128 different countries. Visitors so far include Britain’s Queen Elizabeth, the director of the Titanic film - James Cameron and ex U.S. Secretary of State, Hillary Clinton.

Una Reilly of the Belfast Titanic Centre, a world renowned expert on the ship, says the myth and half-truths about how and why the Titanic sank on its maiden voyage in 1912 with the loss of over 1,500 lives still persist. “There wasn’t just one reason, there were a combination of circumstances” she says.

The 1912 equivalent of texting “I’m on The Titanic! LOL!” was one of those reasons according to Ms. Reilly. “There were so many passengers intent on messaging from the ship during the voyage that the radio room was overworked didn’t get all the warnings about dangerous ice packs”. There was also the fact that the crew member responsible for the key to the binocular cabinet had been replaced in Southampton and hadn’t handed over the key before he left the shop. It emerged during the official enquiry into the tragedy that the binoculars could have averted the disaster.

“That key was bought at auction seven years ago by a Chinese diamond merchant for £97.000” says Ms. Reilly. “He uses it to motivate his staff and warn them about the need for precise detail - he shows it to them and says “This little key caused one of the world’s greatest disasters””.

Ole Gunnar Solskjaer: ‘The sky’s the limit’ for Mason Greenwood 12:07
Garda who investigated child abuse sues Garda Commissioner and State 11:59
Édouard Philippe resigns as prime minister of France 11:28
Monica Seles: The warrior queen who could have been the best ever 11:25
Major works at Rosslare Europort after €30m investment from Irish Rail 11:11