Men pulled from water between Horse Island and Audley Cove 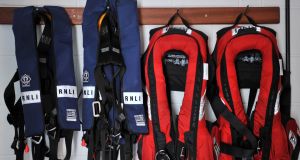 Three men in their 20s were treated in hospital last night after being rescued from the sea off the west Cork coast in an operation involving the Baltimore RNLI. Photograph: Daragh McSweeney/Provision.

Three men in their 20s were being treated in hospital last night after they were rescued from the sea when their dinghy capsized off the west Cork coast.

A member of the public noticed the three shouting for help from the sea between Horse Island and Audley Cove in Ballydehob at about 5pm.

Baltimore RNLI launched both its all-weather boat, the Alan Massey and its inshore lifeboat, which was first on the scene

The alarm had been raised by a kayaker and he directed the Inshore Lifeboat towards the casualties between Horse island and Audley Cove.

The kayaker had managed to assist one of the men to the shore but one of the other men was near exhaustion and his friend was struggling to keep his head above water.

They were brought aboard the inshore lifeboat and transferred moments later to the Alan Massey which brought them to Schull Harbour where medics were on standby.

The man, who was lightly clad, was suffering from hypothermia and had swallowed a considerable amount of seawater and was treated by HSE South paramedics.

The Irish Coastguard Shannon based helicopter, Rescue 115 landed on playing fields nearby and airlifted all three casualties for treatment to Cork University Hospital.

It is understood that all three men, who didn’t have lifejackets, were attempting to swim ashore after their boat capsized but were struggling in the strong flood tide.

All three,who are from the Skibbereen and Ballydehob areas, were last night still being treated at Cork University Hospital following the successful rescue operation.