Footage from St Patrick's Day celebrations in the capital

Footage from the St Patrick's Day parade in Cork 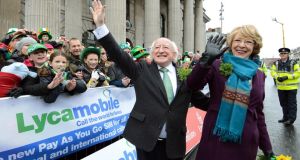 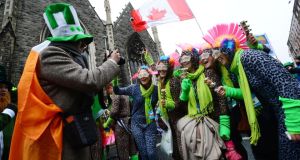 Thousands of people have braved the bad weather to attend the annual St Patrick’s Day celebrations.

The main parade begans at noon, following a route through the city from Parnell Square to O’Connell Street, Westmoreland Street and Dame Street before heading towards Christchurch and finishing at St Patrick’s Cathedral.

Some of the country’s leading pageant companies took part in the spectacle, joined by marching bands from around the world.

Volunteers from Dublin Pride and BeLongTo represented the lesbian, gay, bisexual and transgender (LGBT) community in the main parade, the first time such a large LGBT group took part in the annual event.

The first People’s Parade kicked off ahead of the main parade at 11am - part of The Gathering 2013 campaign – with about 8,000 people invited to attend.

Events were also held around the country to mark the national day, with parades taking part in Cork, Belfast, Waterford and Galway, as well as numerous towns across the country.

The festivities are also being marked outside the country.

Some 436 Irish troops are spread throughout 15 countries on 12 different peace support missions across the globe. The national day has been marked with remembrance dinners, presentations of shamrock and charity events.

Some of the most famous landmarks around the world have also been turned green for the day, as 70 million diaspora mark the occasion. The Pyramids of Egypt and Rio de Janeiro’s Christ the Redeemer statue, the Sydney Opera House, Niagara Falls, the Leaning Tower of Pisa, Burj al Arab in Dubai, Table Mountain in South Africa, New York’s Empire State Building and Berlin’s TV Tower are among the sights being transformed in tribute.

Yesterday, he attended the New York City parade, one of the largest in the world. About two million New Yorkers marched out to line Fifth Avenue to watch the city’s 252nd St Patrick’s Day parade. Mr Kenny walked in the parade alongside the United Irish Counties group.