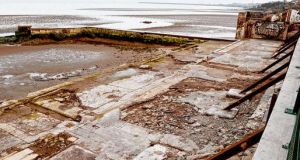 Blackrock baths today - the high-diving platform has detached from the pool base, while the pool structure itself, the seating and changing block, are beyond repair. photograph: david sleator 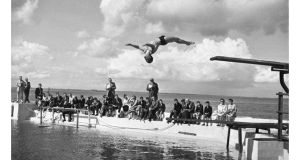 The vast open-air swimming pool was a high summer attraction for all ages and on special days up to 1,000 spectators crowded on to the terraced seating to watch aquatic events. But the glory days ended a long time ago for the Blackrock baths, which have been a sorry and derelict site for years.

But now, Dún Laoghaire-Rathdown County Council is planning a modest redevelopment for the historic sea baths, built in 1839. Creating a beach inlet will cost €600,000, local councillors have been told.

It is expected the project will be developed within the next three years.

The plan will include the retention of the remaining walls of the baths and the development of a beach inlet, similar to a natural cove, within the arms of the old baths.

The well-known white walls will be stone clad as part of the proposal and the entire development will be low maintenance. It is expected most of the work required will be done by council staff, which will also help to keep costs low. The baths, for many years a leading venue for water sports in Ireland, closed in the 1980s. Last year it was deemed a dangerous structure by the council and much of it was demolished.

The pool’s once famous high-diving platform, used by some of Ireland’s foremost divers, had become corroded and detached from the pool base. The pool structure itself, as well as the seating and changing block, was beyond repair and in danger of collapse. Only the pool walls were considered safe enough to be retained.

The council has a 150-year lease for the facility dating back to 1929, when the baths were taken over by the then urban district council in preparation for the Tailteann Games.

The freehold for the site was purchased from Pembroke Estates Holdings in 1997 by Treasury Holdings Limited, now in financial difficulties.

There were various proposals mooted for the development of the site, including an ambitious project in 2007, but none was advanced beyond the pre-planning stage.

Funding for the project will come from the council’s own deposits.

Councillors were given a short private briefing on the development last week, but are expected to get a more detailed briefing at a council meeting next month.

The project will be subject to a part 8 planning process, under the amended Planning and Development Regulations 2001, before it can be developed. This will involve putting the redevelopment plan out to public consultation and accepting submissions from interested parties.

Following consideration of the submissions received, county manager Owen Keegan will present a report to councillors who will then vote on whether to go ahead with the redevelopment, with or without modifications.

Every year the French capital transforms a portion of the bank on the river Seine (pictured) into a sandy stretch of beach – the Paris Plages – complete with parasols, recliners, water sports and, of course, sunshine. It is built for those who remain in the city during the summer months and has become an increasingly popular fixture.

The Belgian capital opens up its own city beach from July to August along the central canal. It is the 10th time the city has done so, with a series of events and a large parade announcing its seasonal arrival.

Influenced by, if not quite as glamorous as the Paris model, Mexico City’s urban “beach” is planted in the middle of a busy ring road and a main avenue. Even still, the facility has proved popular with residents not so keen to flee to the coast.

The aptly named Copencabana is replete with a palm trees and is described as having a Moroccan feel. The food on offer around the giant swimming facility is of that variety, as are the low-slung cushions and sofas on which the city-dwellers sit and pretend they are somewhere else. MARK HILLIARD