Quinn warns against ‘seduction’ of technology in education

Short-term gadgets will not replace history of learning, says Minister 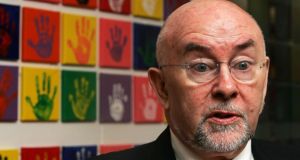 “We have to separate very clearly the difference between the seduction of modern technology, which is a phenomenon of short duration, and the necessity of European education which goes right back to the Acropolis and Socrates,” Minister for Education Ruairí Quinn has said.

We should not get “seduced” by technology and fall into a “commercial trap” by providing the latest hardware to schools, Minister for Education Ruairí Quinn has said.

Technology can help teachers communicate with each other, reduce costs and help disadvantaged schools, he told a conference of members of parliaments from EU states in Dublin Castle.

But he added: “Putting your educational taxpayers’ money on short-term hardware is not the road to go.”

We are “in the midst of a new electronic Gutenberg moment” Mr Quinn said, referring to the founder of the printing press.

Over half of the 93,000 teachers in Ireland exchange ideas over the Internet, he said. It was hoped the €60 million cost of carrying out the Leaving and Junior Certificate exams every year could be reduced by replacing the current paper-based system, he added.

“We have to separate very clearly the difference between the seduction of modern technology which is a phenomenon of short duration and the necessity of European education which goes right back to the Acropolis and Socrates,” Mr Quinn said.

European co-operation on technology and education could help identify what methods and hardware worked and avoid past mistakes, he said.

Europe was lagging behind on bringing technology into the classroom and university, said Jan Truszczynski, the European Commission’s head of the department of education, culture, multilingualism and youth.

The commission would bring out a “political initiative” after the summer aimed at raising technology skills, he said.

Minister for Communications, Energy and Natural Resources Pat Rabbitte and film producer and Ireland’s digital champion David Puttnam will address the conference in the afternoon.