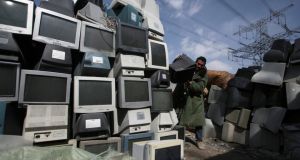 Old computer monitors being recycled in Beijing, China, this week. First-quarter shipments of PCs fell 14 per cent worldwide from the same time last year, according to International Data Corporation - the deepest quarterly drop since the firm started tracking the industry in 1994. Photograph: China Daily/Reuters

The ailing personal computer market is getting weaker and starting to look as though it will never fully recover as a new generation of mobile devices reshapes the way people use technology, new reports have revealed.

The latest evidence of the PC’s infirmity emerged with the release of two grim reports showing unprecedented declines in sales of desktops and laptops during the first three months of this year.

It appears a pivotal makeover of Microsoft’s ubiquitous Windows operating system seems to have done more harm than good since the software was released last October.

“This is horrific news for PCs,” said BGC Financial analyst Colin Gillis. “It’s all about mobile computing now. We have definitely reached the tipping point.”

First-quarter shipments of PCs fell 14 per cent worldwide from the same time last year, according to International Data Corporation - the deepest quarterly drop since the firm started tracking the industry in 1994. Another research firm, Gartner, pegged the first-quarter decline at 11 per cent.

The deviation stemmed in part from the firms’ slightly different definitions of PCs, but the PC market is in its worst shape since IBM released a desktop machine in 1981.

PC sales have now fallen from their year-ago levels in four consecutive quarters, a slide that has been accelerating even amid signs that the overall economy is getting healthier.

PCs are going out of style because they typically cost more than smartphones and tablets, and are not as convenient to use.

Apple’s late chief executive Steve Jobs, whose company propelled the mobile computing revolution with the 2007 release of the iPhone, declared that the world was entering a “post-PC era” shortly after the iPad came out three years ago.

In a June 2010 appearance at a technology conference, he likened challenges facing the PC industry to what happened to trucks in the US decades ago as a shift away from farming caused more people to move into cities where they wanted to drive cars instead.

“I think PCs are going to be like trucks,” Mr Jobs predicted at the time. “Less people will need them.”

But the traditional PC still has a long way to go before it becomes obsolete.

Despite the dismaying start in the first quarter, more than 300 million PCs are still expected to be sold worldwide this year.

Tablet computers, a category that was insignificant until the iPad came along, is catching up rapidly: nearly 200 million of those devices could be sold this year. Meanwhile, worldwide smartphone sales could surpass 1 billion units this year, Mr Gillis predicted.

PC sales could be undermined even more during the next few years with the release of “wearable computing” devices that connect to the internet through voice-activated equipment attached to glasses and wristwatches.

The growing reliance on mobile devices is creating new opportunities and tensions throughout the technology industry. Internet companies such as Yahoo and Facebook that initially designed their digital services to be primarily consumed on PCs have been scrambling to tweak things so they work better on smartphones and tablets.

But the companies most threatened by the mobile upheaval are those that depend on PCs to make most of their money. This group includes technology heavyweights such as Windows maker Microsoft, PC makers Hewlett-Packard and Dell, and PC chip maker Intel.

“It’s time for these companies to make some critical decisions and ask themselves, ‘How are we going to turn this ship around?’,” said technology industry analyst Patrick Moorhead.

Microsoft CEO Steve Ballmer thought he had come up with a tonic last year when his company released a radical new version of Windows.

Windows 8 has a completely new look similar to the design of the software running the most popular smartphones and tablet computers. The overhaul requires a relearning process, a leap that many consumers and corporate buyers aren’t ready to take.

All signs so far point to Windows 8 being a flop.

“Unfortunately, it seems clear that the Windows 8 launch not only didn’t provide a positive boost to the PC market, but appears to have slowed the market,” IDC vice president Bob O’Donnell said.

The newest version of Windows is designed to work well with touch-sensitive screens, but the displays add to the cost of a PC. Together, the changes and higher prices “have made PCs a less attractive alternative to dedicated tablets and other competitive devices”, Mr O’Donnell said.

In a statement, Microsoft described the PC market as “evolving and highly dynamic”. Referring to a number that it has previously released, the company said it has sold more than 60 million copies of Windows 8 so far.

In its tally, IDC excludes tablets, even if they run PC-style software. It also excludes any device that has a detachable keyboard.

With the release of Windows 8, PC makers have been reviving their experiments with tablet-laptop hybrids, some of which have detachable keyboards.

Consumers are likely to have shifted some of their buying away from traditional laptops and towards these new devices, which means that the total sales decline of Windows-based devices might not be quite as drastic as IDC’s numbers suggest.

Hewlett-Packard., the world’s largest PC maker, saw a 24 per cent drop in shipments in the first quarter compared with the same period a year ago - its steepest quarterly decline since the company bought rival PC maker Compaq a decade ago.

Meanwhile, the industry’s number two, China’s Lenovo Group, is benefiting from sales to first-time buyers in China and other developing countries. As a result, it held sales steady, alone among the world’s top five PC makers, according to IDC’s figures.

1 Covid-19: Limited easing of restrictions proposed as pressure grows to reopen economy
2 Barack Obama urges those protesting in US to seize the momentum
3 Covid-19: Varadkar downplays expectation of accelerated lifting of restrictions
4 Nursing homes dispute accuracy of HSE data on Covid-19 deaths
5 With Lincoln looking on, the crowd dropped to their knees as 7pm approached
Real news has value SUBSCRIBE