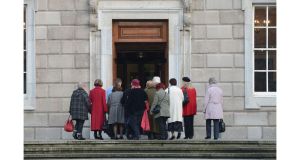 Magdalene women on their way into the Dail to sit in the public gallery for the debate on the McAleese Magdalene report and an apology from Enda Kenny on behalf of the State. Photograph: Alan Betson/The Irish Times

Taoiseach Enda Kenny has apologised to the women who spent time in the Magdalene laundries.

In an emotional speech, which was greeted by loud applause, Mr Kenny said: "This is a national shame for which I say again I am deeply sorry and offer my full and heartfelt apologies."

Opening the Dáil debate tonight on the McAleese report, Mr Kenny said the Magdalene laundries were reserved for what was offensively and judgementally called fallen women.

The women, he added, were wholly blameless.

He added: "I, as Taoiseach, on behalf of this State, the Government and our citizens, deeply regret and apologise unreservedly to all those women for the hurt that was done to them, for any stigma they suffered as a result of the time they spent in the Magdalene laundry."

He said the Government had asked the president of the Law Reform Commission, Judge John Quirke, to undertake a three-month review and make recommendations about the criteria that should be applied in assessing the help the Government could provide in the area of payments and other supports, including medical cards, psychological and counselling services and other welfare needs.

The terms of reference for Judge Quirke were published this evening following Mr Kenny's speech.

When Judge Quirke has reported, a fund will be established to assist the women based on his recommendations.

"I am confident that this process will enable us to provide speedy, fair and meaningful help to the women in a compassionate and non-adversarial way," Mr Kenny said.

"The reality is..... that for 90 years ..... Ireland subjected these women and their experience..... to a profound and studied indifference," Mr Kenny said.

"We now know that the State itself was directly involved in over a quarter of all admissions to the Magdalene Laundries."

Mr Kenny said he hoped the publication of the McAleese Report and the Government's apology would make a contribution to the healing process.

For decades thousands of women and girls, often unmarried mothers and women who left their husbands, were placed into work-houses.

Concluding his apology, Mr Kenny said: "Let me hope that this day and this debate heralds a new dawn for all those who feared that the dark midnight might never end."

Tánaiste Eamon Gilmore said he wanted to join the Taoiseach "in offering, on behalf of the State and the Irish people, a heartfelt apology to the survivors of the Magdalene Laundries."

Commenting on the possibility of restitution, he said there was "a role" for the religious orders which ran the laundries, "to make a fair contribution, along with the taxpayer".

"These laundries were private businesses, run by those orders, which benefited from the unpaid labour of the women committed to them," he said.

Earlier, Independent councillor Mannix Flynn spoke at a candle-lit vigil which was held in solidarity with the women outside Leinster House.

Mr Flynn said the laundries represented “a regime of torture and a regime of slavery throughout this country.”

He said there were “many more” such scandals to be uncovered. He added that "we must remember the children out there still looking for their mothers."

Spokeswoman for Justice for Magdalenes Claire McGettrick said "these women are our sisters,our mothers, grandmothers, our neighbours and our friends."

"For decades they have walked a lonely road," she said.

The vigil was organised by the Justice for Magdalenes (JFM) group and the National Women’s Council of Ireland. Singer Mary Coughlan also took part.

Three groups that have represented the women – JFM, the London Irish Women Survivors Support Group and Magdalene Survivors Together – agree that a package to assist the women should include pensions, healthcare, counselling, housing services and advice.

They also agree that lump-sum compensation should be paid to them. JFM has proposed a €100,000 sum in addition to a package of services including pensions and lost wages. That figure “reflects that women are forgoing important legal rights to go before the courts”, JFM has said.

At the weekend Minister of State for Health Kathleen Lynch said the package provided to the women would be assessed on an individual basis.

The McAleese report found that the State referred or facilitated the transfer of at least 26.5 per cent of women to the laundries, based on available records. It also found direct State involvement in key areas such as the funding and inspection of the laundries.

The report also stated that 61 per cent of the women spent less than a year in the laundries and that their average age at time of entry was 24.

Special schools may be permitted to reopen on a voluntary basis 01:15
‘Nothing is being ruled out’ in relation to tightening incoming travel rules 01:00
At least 50 coercive control cases under investigation or with DPP for consideration 01:00
Up to 23,000 fewer homes to be built because of Covid-19, Central Bank warns 00:01
TV audience for Biden inauguration tops Trump’s from 2017 23:48