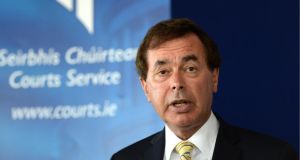 Minister for Justice Alan Shatter has said the Government will increase the size of the Supreme Court from eight to 10 judges in the coming months, a move that will allow it to sit in three divisions for the first time and help cut into the waiting list. Photograph: Dara Mac Dónaill

At a recent hearing in the Supreme Court, as two barristers ruminated at length over how to go about delivering a box of documents to the court, Mr Justice Donal O’Donnell rested his chin in his hand and stared blankly into the distance. “This is not exactly high jurisprudence, gentlemen,” he told the barristers.

Variations of this scene occur frequently in the court. Often in place of the barristers are ordinary citizens who choose to represent themselves (last year, citizens without legal representation made up 26 per cent of all applicants). Spend a while in the court and you’ll find some old faces reappearing; serial lay litigants who must each time be patiently talked through every step of the court’s arcane codes and procedures.

The judges do so with patience and courtesy, but behind the scenes the logjams weigh heavily on the mood in the court. The floor in a typical judge’s chambers is piled high with file boxes. A rule of thumb is that a four-hour hearing will require eight hours’ preparatory reading. “There is a feeling of pressure,” says one.

Bottleneck
Unusually among equivalent courts elsewhere in the world, the Supreme Court is the final court of appeal for all cases thrown up by the High Court, regardless of whether or not they have a constitutional element. As the High Court has expanded to handle the increasing volume and complexity of the cases coming before it, a bottleneck has developed further up the chain in the Supreme Court. In 2003, the waiting time for an appeal at the State’s highest court was four months. Today, it’s four years.

According to figures published this week, the court received 605 appeals last year – a 21 per cent increase on 2011. It gave judgments in 121 cases, compared to 64 in the US supreme court and 85 in the supreme court in London. “They’re absolutely overburdened, and sometimes that feeds into the quality of the work,” says one senior counsel. “It’s unreal to expect them to go through all those documents.”

Moves are afoot to ease the burden, and in the process to bring about the biggest transformation in the history of the court. Minister for Justice Alan Shatter has said the Government will increase the size of the court from eight to 10 judges in the coming months, a move that will allow it to sit in three divisions for the first time and help cut into the waiting list. The Government expects that as the backlog is dealt with, the Supreme Court will be reduced again by not replacing retirees.

Nonetheless, the two new appointments – in addition to the retirements of two current judges, John Murray and Nial Fennelly, over the next two years – will give the Government the chance to significantly alter the profile of the institution. One of the first things some lawyers believe it should do is appoint more women and address the striking gender imbalance on the current bench.

More significantly, a referendum is to be held in the autumn to create a Court of Appeal, which will hear most appeals from the High Court and leave the Supreme Court free to deal with constitutional cases or those involving a fundamental point of law.

The new court, according to legislation published yesterday, will sit at an intermediate level between the Supreme and High Courts. Drawing largely from the model suggested in 2009 in the report of the Working Group on the Court of Appeal, chaired by now chief justice Susan Denham, the Bill states that the new court will hear appeals from the High Court while the Supreme Court will hear cases on appeal from the new court. In exceptional circumstances, provided that the case involves a “matter of general public importance or in the interests of justice”, the Supreme Court will take appeals directly from the High Court.

The reforms will also adjust the long-established hierarchy in the system. If voters approve the amendment in the autumn, the Constitution will be changed to provide that the president of the Court of Appeal shall be the person to substitute for the chief justice on the Presidential Commission.

The commission, which is made up of the Chief Justice, the Ceann Comhairle and the Cathaoirleach of the Seanad, is the collective vice-presidency of Ireland, taking over all functions when the office of president is vacant or the head of State is unavailable. Currently it is the president of the High Court who substitutes for the chief justice on the commission.

In another change, the president of the Court of Appeal will become an ex officio member of the Council of State.

Minister for Justice Alan Shatter told The Irish Times he envisages that the “vast majority” of appeals will be concluded at the Court of Appeal, significantly easing the burden on the higher court.

Enormous pressure
“This is a vastly important reform,” he says. “It’s important that those who resort to our courts have their issues of dispute resolved with reasonable speed. The Supreme Court is under enormous pressure because of the very substantial appeals that are taken nowadays from the High Court to the Supreme Court, and we must ensure that litigation is concluded within reasonable time.”

However, the Bill leaves a number of questions unanswered. It does not specify how many judges will sit on the new court, their remuneration, age of retirement or pensions – matters that have been the source of speculation in recent months and will have to be settled by law if the referendum is passed. One senior counsel suggests these factors will be important in attracting judges to the court, particularly if a perception develops that the more stimulating cases are all going up to the Supreme Court. “If it’s regarded as a dumping ground for very boring cases like personal injuries quantums, you’re not going to get top-calibre people applying for it. They’d be bored out of their minds,” says the lawyer.

Is it also unclear whether the Government intends to promote High Court judges to the new institution or appoint from a wider field. Either way, a significant number of judicial vacancies may soon be the Government’s to fill.

The establishment of the new court will not resolve all the Supreme Court’s problems. One of the most glaring – the current system of judicial appointments – will remain, and many influential figures in the Government and the judiciary hope that in time that too can be substantially reformed.

Both Shatter and Denham have publicly distanced themselves from the current appointments system, where judges are directly chosen by Government, usually (though not necessarily) working from an alphabetical list presented by the Judicial Appointments Advisory Board.

The immediate effect of a new court’s creation would be a dramatic easing of the Supreme Court’s workload. But many close observers of the higher court hope it will bring more profound changes to its working methods, allowing it the space to develop its thinking on the Constitution.

Clearer insight
The changes would also allow outsiders gain a clearer insight into what can be an opaque institution. The Bill published yesterday provides for the removal of the “one judgment” rule in cases involving the constitutionality of laws – a reform that will be warmly welcomed on the court and outside.

It will mean that judges will be permitted to publish their own judgments on all constitutional appeals, allowing us to understand the court’s internal differences to a greater extent than has been possible until now.

The changes could also revive the debate, inside and outside the court, between advocates of a more expansionist court and those who have a more limited view of its role.

“I think the Supreme Court has undoubtedly achieved a lot over its 90 years or so of existence, but it has missed many opportunities,” says Prof Brice Dickson of Queen’s University Belfast. “Given the imminent reforms, the potential now exists for the court to make a real difference.”

Ireland retirement was ‘hardest decision’ for David McGoldrick 06:30
China detention: ‘Nobody is helping us – we are just begging for help’ 06:00
Baby, it’s cold outside: Electricity consumption hits record high 05:55
E-scooter companies keen to launch rental services in Ireland 05:46
Customers ‘tap’ for €28m per day in October 05:23