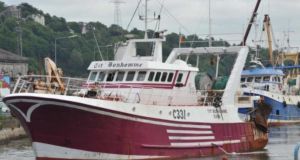 The sole survivor of the Tit Bonhomme fishing tragedy, 44-year-old Abdelbaky Mohamed has told an inquest into the deaths of his five crewmates that he had sufficient sleep and rest on the ill-fated voyage.

A Marine Casualty Investigation Board report into the sinking found that crew fatigue was the main cause of the tragedy which happened when the 21 metre steel hulled vessel hit Adam Island at the mouth of Glandore Harbour at around 5.35am on January 15th 2012.

According to the MCIB report, crew fatigue was found to be “the single overriding causal factor” which led to the sinking and the deaths of skipper Michael Hayes and four of his five crewmates, Kevin Kershaw, Wael Mohamed, Attiy Shaban and Saied Alieldin.

The MCIB investigation found that in the 40 hours between the twin-rigged trawler’s departure on a fishing trip at 2.40pm on Friday January 14th and its return to Union Hall around 5.30am on Sunday January 15th all of the crew had less than four to five hours sleep.

But at today’s inquest in Cork city into the five deaths, Abdelybaky Mohamed was asked by Coroner for West Cork, Frank O’Connell if he himself was exhausted at the time of the collision and he said that he had sufficient rest.

Speaking with the assistance of an interpreter, Mr Abdelbaky Mohamed said it was difficult to say how much sleep he had in total as he would sleep for two hours and then perhaps work for six or seven but he was not exhausted at the time of the collision. The inquest continues.

Coronavirus: UK fatalities rise to 1,408 with worst thought yet to come 21:11
Irish flight to collect Covid-19 supplies in China resumes journey 21:08
Total of Covid-19 diagnoses increases by 295 to 2,910 21:02
Coronavirus: Africa prepares for surge in cases and mass casualties 20:51
President urges people to ‘stay patient, and vigilant’ with coronavirus measures 20:46