Women who take abortion pills ‘should not be reported’

Rights groups call for guidelines for healthcare professionals on medication 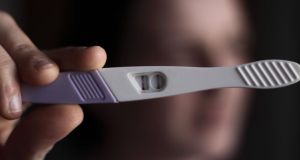 Guidelines should be issued to healthcare professionals emphasising they should not report a woman who has taken abortion medication to gardaí, human rights and women’s groups have said. File photograph: Paul Mezzer/FRF/Getty

Guidelines should be issued to healthcare professionals emphasising they should not report a woman who has taken abortion medication to gardaí, human rights and women’s groups have said.

There are no guidelines in this jurisdiction, although equally there is no legal obligation on clinicians to report a woman or girl they suspect of taking the abortion pill.

Under the Protection of Life During Pregnancy Act 2013, inducing an illegal abortion is a criminal offence punishable by a prison sentence of up to 14 years.

Clinical guideline for health professionals on implementing the Act – issued in 2014 – are silent on how they should respond to a woman presenting for treatment after illegally inducing an abortion.

Both the Irish Family Planning Association (IFPA) and Amnesty International Ireland say woman and girls must feel confident they will not be reported to gardaí if they present at an emergency department having taken abortion medication.

Their move comes in the wake of the successful prosecution in Belfast on Monday of a young woman who imported abortifacient medication over the internet in 2014.

Aged 19 at the time, she was reported to the Police Service of Northern Ireland by her then housemates who had found bloodied materials and an aborted 10- to 12-week-old foetus in a bin.

She was prosecuted under section 58 of the 1861 Offences Against the Person Act and received a three-month prison sentence, suspended for two years.

A second case, yet to come before the Northern Irish courts, involves the prosecution of a mother who imported abortion medication for her teenage daughter.

Though no such case has come before the courts here, it remains unclear what a clinician should do if they suspect a woman has illegally induced an abortion.

The HSE was unable to provide a comment on what its employees should do, while the Rotunda Hospital in Dublin said it would not comment on a “hypothetical scenario”.

The National Maternity Hospital at Holles Street said it had never dealt with a woman presenting after taking abortion medication so had not taken legal advice on it.

“We treat every patient on the basis of medical need and our primary focus is to keep women safe and well,” a spokesman said.

Guidelines for health professionals issued by the Northern Irish Department of Health last month say though they have a duty to report an unlawful termination of pregnancy, they “need not give that information if they have a reasonable excuse for not doing so . . .”

The approach has been described as a “don’t ask, don’t tell” policy.

Separately, the Health Products Regulatory Authority says it has not, and would not, prosecute a woman who illegally imported abortion medication for personal use.

Seizures of imported abortion pills in the Republic are growing.