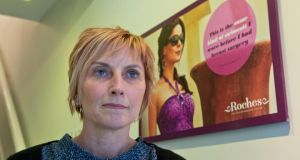 Anne Roche, the manager of Roches in Kimmage, which stocks mastectomy swimsuits, says they have been trying to raise the issue of entitlements for years. Photograph: Brenda Fitzsimons

A Dublin woman who survived breast cancer and had a double mastectomy has described as “deeply unfair” the fact that she is entitled to less support with the costs of special underwear because she lives in the “wrong postcode” area.

She is entitled to €68.50 towards a prosthesis and €33 each towards the cost of two mastectomy bras.

She is not entitled, due to where she lives, to a mastectomy swimsuit.

A prosthesis costs between €100 and €120, and bras cost about €50. A specialised mastectomy swimsuit, which gives extra padding and secure support, costs about €90.

Women who have survived breast cancer and have had partial or full mastectomies are entitled to allowances towards the cost of a prosthesis and two mastectomy bras, after surgery, regardless of means.

In some areas they are also entitled to a mastectomy swimsuit.

If Ms Wall lived in community health area two – which includes Ringsend, Ballsbridge, Dundrum and Mount Merrion – she would be entitled to €140 towards a prosthesis, €51.50 each towards bras and €90 towards a mastectomy swimsuit.

“I only found out about the entitlements just recently and was delighted. For some reason I wasn’t told 10 years ago. I am on a medical card and things are tight financially,” says Ms Wall.

A single mother, she is studying and also volunteers with the scouts. She is travelling to Finland in July for an international scout jamboree which would involve her swimming.

She has not swum since her surgery, having had to tell her now 13-year-old son, “Mummy doesn’t swim”, since he was three.

She approached Roches Positive Appearance and Wellbeing in Kimmage, Dublin, which specialises in bras, swimsuits and wigs for women undergoing post-cancer treatment.

Manager Ann Roche had to deliver the news to her that because she lived in the “wrong postcode” she would not be entitled to a swimsuit.

“It is an intrusive question. And then it is even worse to have to tell them that because they live in the ‘wrong postcode’ area they are not entitled to the same as other women.”

Ms Wall said she was angry about the anomaly, but added it would have been “a really devastating blow if it had happened just after treatment”.

“You feel so vulnerable after surgery, so unsure,” she said.

A HSE spokeswoman said: “The HSE is addressing inconsistencies in relation to the provision of post-mastectomy products and has an advisory group in place to prepare standardised guidelines on the matter for all parts of the country.

“This is being undertaken in consultation with the Irish Cancer Society.

“The work of the group is near completion and standard operating procedures will be issued shortly to all HSE areas for implementation.”

1 Republic’s Coronavirus death toll rises by 28 as confirmed cases up by 500
2 Doctors sent to help at Cavan hospital after up to 70 staff infected with coronavirus
3 ‘When I look at the viral loads we find in elderly people, it is mind boggling’
4 This time, the future of the euro really is at stake
5 Threatening posters in Co Clare tell holiday home owners to ‘f**k off’
Real news has value SUBSCRIBE