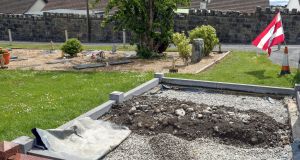 The grave where Sylva Tukula is buried at Bohermore Cemetery in Galway.

A “breakdown in communication” between An Garda Síochána, the coroner’s office, and the Departments of Justice and Social Protection resulted in a woman who died in a Galway direct provision centre being buried without her friends present.

Sylva Tukula, a transgender woman, was buried last month following an investigation into her death on August 2nd last at the all-male Great Western direct provision centre. Ms Tukula, who was believed to be in her mid-30s, had spent most of her life in South Africa.

Her body was held for nine months while gardaí attempted to make contact with her family in Africa through Interpol. She was buried after the coroner was told no next of kin could be found.

However, Ms Tukula’s friends and colleagues say they were “assured by both national and local State representatives” that they would be notified as soon as burial arrangements were made.

The Department of Justice confirmed it had been liaising with gardaí and Ms Tukula’s friends to ensure her body was released to the friends. It says it found out what happened two weeks after the May 9th burial in a HSE-owned plot at Bohermore cemetery, which happened on the authority of the city coroner.

The AMACH! LGBT+ Teach Solais volunteer group said the decision to bury Ms Tukula without a ceremony was “deeply offensive” to her friends and the LGBT community.

“We had the understanding that we would be made aware of the funeral arrangements in advance so our community, Sylva’s Galway family, could be a part of this service, and to ensure that her life was celebrated.”

The group said the news was devastating for her friends.

Galway city coroner Dr Ciarán Mac Loughlin, who signed off on the burial, said he was not informed that Ms Tukula’s friends were waiting to receive her body.

“Had we known anyone was interested we would have informed them but no one said anything to me or the bereavement officer in Galway,” he told The Irish Times.

“We certainly would be very upset if people thought this was done in any surreptitious or underhand manner. It wasn’t, we had nothing to hide behind. If the interested parties had said they wanted to take custody of the body that would have been fine, we would have released it to them.”

He added that Ms Tukula was found to have died of natural causes.

A spokesman from the Department of Justice said it regretted “the unintended distress” caused to Ms Tukula’s friends, apologised for a “breakdown in communication” and said all necessary steps would be taken “to ensure this outcome is never repeated”.

He said that despite the best efforts of the Reception and Integration Agency (RIA), news of her burial was only released after the event. He said an RIA staff member, who was in contact with An Garda Síochána while they carried out the investigation into the death, sought an update in March.

The RIA said it sought an update from An Garda Síochána, which said a request was made to the superintendent’s office on April 4th to have Ms Tukula’s remains released for burial. The RIA sent reminders on April 17th and May 3rd, the spokesman said.

On May 21st, the RIA received an update from gardaí saying relatives could not be found and the decision to release the body rested with the coroner. The next day the RIA was informed by University Hospital Galway that the burial had taken place on the authority of the coroner.

A Garda spokesman said the force was “not aware of when the burial took place” and said it was “most likely arranged by the Department of Justice”.

A Department of Social Protection spokeswoman said it engaged with the hospital to arrange the burial. She said they had not been made aware of any agreement that the AMACH LGBT+ group were to claim the body.

The AMACH LGBT+ group said: “We are left with more questions than answers as to how this has been allowed to occur. Our dear friend Sylva was failed by the system in which she was entrapped, in many ways; yet at all times she bore these failings with grace, with dignity and with a warm smile.”

It called for the miscommunication to be investigated “to the fullest possible extent” to establish “how the system failed our friend Sylva this last, final time”.

The Department of Justice said it would liaise with her friends and has offered to hold an “appropriate memorial” in Galway.