Why is it taking so long for 20-somethings to grow up? 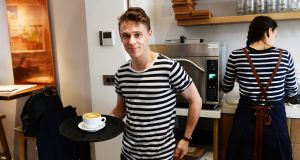 Fionn Rogan working at Java Republic on Molesworth Street. He sparked a debate this week when he wrote about how his generation was being increasingly infantilised, due to soaring rents and a loss of financial independence. Photograph: Cyril Byrne/The Irish Times

Young people are living at home for longer, staying in full-time education in ever-greater numbers, and avoiding adult commitments. We are in the midst of what some sociologists call a changing timetable of adulthood.

The traditional milestones of life seem to have shifted as young people put off marriage or settling down for longer than ever before. New guidance for psychologists acknowledges that adolescence now runs well beyond 18 and up to about 25 years of age, for the purposes of treating young people.

Neuroscience shows that young people’s cognitive development continues into this later stage and that their emotional maturity, self-image and judgement have yet to be fully developed.

Dr Tony Bates, chief executive of Jigsaw, Ireland’s National Centre for Youth Mental Health, sees first-hand how young people are increasingly reliant on the support of their parents into their 20s and beyond.

For those shielded from the real world, there can be real consequences for their resilience. “That period of dependence has been extended, which is as much to do with economics as anything. They can’t live on their own and education is so critical these days. In a sense, that period of immaturity is extended,” he says.

There is a temptation among parents to smooth the way for their children and remove obstacles in their path. It’s one reason, Dr Bates suggests, why mental health issues can appear among young people when they leave third-level. “Problems tend to surface in people’s mid-20s these days. Young people’s lives were fine in school and college, but they can miss the ability to cope with life beyond that. When the music stops, they are not ready for the next step.”

It is a familiar picture to Fionn Rogan, a 23-year-old student studying at Trinity College Dublin.

He sparked a debate this week when he wrote about how his generation was being increasingly infantilised, due to soaring rents and a loss of financial independence.

“It’s not what we want, but it’s the situation we find ourselves in,” says Rogan.

“Until you live on your own and are working to pay your rent, you’re still a semi-child... There is this bumper period between childhood and adulthood and it’s changing our mindset and the way we approach the world.”

He feels the vacuous world of listicles and Snapchat are symptoms of putting off adulthood. “So much of what we consume is dull and inane... it’s like we’re filling up our time with click-bait,” he says.

For his part, Rogan works two jobs – in a coffee shop and in an accountancy firm – and shares a rented apartment. The experience of juggling college assignments, dealing with stroppy customers and making ends meet are, he feels, vital life skills.

“It gives you an understanding of what real life is like. It teaches you to be a better customer, it teaches you humility.

“It builds up your confidence and hardens you up. There are a lot of students going straight into a profession without that rounded experience.”

One academic who has studied family structures in Ireland – and who doesn’t wish to be named – broadly agrees. He says young adults who are living at home, or staying in the education system for longer, are being robbed of responsibility for decision-making during their formative years.

“If you don’t live away from home, if you don’t enter the labour market, then you’re not making decisions for yourself,” he says. “I see it with my own daughter who is living at home in her mid-20s. It delays the process of feedback on decisions, or ‘automotivity’. That feedback moulds us and changes us. It’s how we make better decisions and good habits.” The issue of whether this extended adolescence is really a new stage in life is a matter of lively debate among academics. A century ago, psychologists made the case that adulthood was a developmental stage. Some now make the case that “emerging adulthood” – from early to mid-20s – should be treated as a separate developmental stage.

Others, however, insist that economic factors are simply behind young people delaying the milestones of old. The new generation is, in many ways, very similar to previous generations.

Dr Brian Gormley, Dublin Institute of Technology’s head of Campus Life, has researched trends regarding students who work part-time and live at home. He doesn’t recognise the picture being painted of an “infantilised” generation.

“Compared with the generation who attended college in the 1980s, a much higher proportion have part-time work now, and very often they have more complex lives and responsibilities. Students in the 1980s were quite homogenous, generally from higher socio-economic groups. Thankfully, the student population is much more diverse now.”

Latest data indicates that about 50 per cent of students in Ireland work part-time. If anything, Dr Gormley says, those who live at home are more likely to work part-time jobs – partly because they are not commuting at weekends and are more rooted in their community.

About 40 per cent of students live at home – about twice the rate of the UK – but a similar level to many other European countries. The figure for Ireland has not shifted significantly over the past decade.

One change Dr Gormley has seen, however, is the bigger role parents play as they struggle between wanting students to be independent and wanting to protect them.

It prompted DIT to begin an orientation programme for parents a few years ago.

“We explain about the supports available to students, and give tips on how to positively support their son or daughter while in college,” he says. “However, one of the main messages is that DIT’s relationship is with the student, and the students need to take responsibility for developing as an independent learner.”

For all the fretting about how well graduates are prepared for the real world, employers and recruiters tend to have a broadly positive view of the quality of young people. Mike McDonagh, managing director of Hays recruitment, says students who have worked part-time is the norm. If anything, the nature of their work experience tends to reveal an ambition to help launch their career in the future.

“Summer internships such as those run by law or accountancy firms are increasingly popular and over-subscribed,” says McDonagh. “In fact many, particularly those seeking roles in the IT sector, have often taken their interest in technology to the next level by developing an app or using their tech knowledge to partner with tech start-ups to develop business ideas.” Frank Gleeson, the managing director of Aramark – a catering firm which employs about 15,000 people – has seen a major change in the kind of work young students are looking for. “They are much more discerning nowadays. They are only looking for employers who will give them training and opportunities. They don’t want to chop stone; they want to learn,” he says.

The bigger question of whether a prolonged period of emerging adulthood – whether real or imagined – is actually a good or a bad thing sparks a whole other debate. Given that life-spans are so long, is it a valuable time for self-discovery and personal development? Or would young people be better off simply getting started with life projects earlier?

Gleeson feels an older generation shouldn’t judge: life for younger people is vastly different. “I’m 50. My generation’s imperative was to get a job, a house and wife or husband... Life is different for them. Education is more important than ever and industries have shifted towards professional services, IT and so on... It’s just a generational change, it’s not necessarily a bad thing.”

Whatever about what is right or wrong, Dr Bates feels parents have a vital role to play in helping rather than hovering.

“We, as parents, need to allow young people to grow up. Resilience is what we want for our kids, more than safety. It’s not about feeling good, but feeling confident you can cope with challenges. You only do that in the face of challenge and uncertainty – and not sitting on the couch at home.”