Why Europe needs to reverse the austerity Germany has championed

Opinion: ‘Not only was Ireland bullied by the ECB into entering a programme, but a large chunk of the received funds was transferred straight to the financial sector and foreign creditors (including various German banks)’ 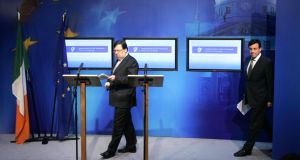 Then taoiseach Brian Cowen and Brian Lenihan, minister for finance, making a statement following the Cabinet meeting regarding the financial bailout in 2010. Photographer: Dara Mac Dónaill / THE IRISH TIMES

Germany, written off as the “sick man of Europe” when the euro was launched in 1999, is today considered by most – first and foremost by the Germans themselves – to be the continent’s most successful economy and a model for other countries to follow. But this is a dangerous misconception. As Matt O’Brien recently wrote in the Washington Post: “It doesn’t seem like it, but Germany is still the sick man of Europe. It’s just that everybody else is terminally ill now.”

In the face of rapidly deteriorating economic data (stagnation, falling exports and industrial production, dwindling public and private investments, dangerously low inflation), reality is finally dawning on elements of the German elite. Marcel Fratzscher, head of the German Institute for Economic Research, argues in his new book Die Deutschland-Illusion that the myth of the “German model” is based on a series of illusions, chiefly the idea that Germany’s impressive euro-era trade surplus (mirrored by widening trade deficits in peripheral countries) is a result of the economy’s greater productivity and efficiency, supposedly achieved as a result of former chancellor Gerhard Schröder’s 2003-2004 “Hartz IV” labour reform.

In a currency union with a high level of internal trade, the surpluses of some countries are necessarily mirrored by the deficits of others. Or, more accurately, the former are dependent on the latter.

Which brings us to the next point: the fact that Germany and other northern countries, through their financial sectors, actively contributed to the bubbles in the countries of the periphery.

German banks alone had lent $720 billion to Greece, Ireland, Italy, Portugal and Spain by the end of 2009. The result was that consumers in these countries were able to buy ever-growing quantities of German goods. This amounted, effectively, to a sovereign version of what is known in retail as “vendor finance”, whereby a firm lends money to be used by the borrower to buy its products.

This is crucial in understanding the European establishment’s response to the crisis: following the subprime crash, German banks found themselves massively exposed to the banks of the periphery. Between 2008 and 2009 European governments committed a total of €3 trillion to bail out their overindebted banks – and their creditors. This crippled the economies of a number of countries, which ultimately agreed to enter EU-IMF “bailout” programmes.

In most cases this amounted to what was described as a back-door bailout of reckless German lending. Ireland’s case is paradigmatic: not only was the country bullied by the ECB into entering a programme, but a large chunk of the received funds was transferred to the State’s financial sector and foreign creditors (including various German banks). The same applies to other bailouts.

In recent years the response of the European establishment has been to enforce the “German model” on the rest of the euro zone, by forcing peripheral countries to improve their competitiveness through pursuing fiscal austerity and following the German wage-slashing model through “internal devaluation”.

While this has effectively led to a rebalancing of intra-euro trade, such “improvement” is attributable largely to decreased imports, due to the collapse of demand and growing unemployment and poverty across the entire currency area, rather than increased exports.

But this has simply transformed Europe’s imbalances into an even more dangerous and destabilising global imbalance, with low demand in Europe now acting as a serious drag on the world economy. The implications are obvious: just as Germany’s policies are not sustainable on a European scale, they are not sustainable – when applied to the entire currency area – on a global scale either, especially in the face of weak global demand. Which is why German exports are finally starting to take a hit.

We know what is needed to reverse the current self-defeating pact of austerity and internal devaluation: large-scale fiscal expansion – not just in Germany but in the euro zone as a whole – aimed at boosting internal demand. This would provide some respite to the battered people of Europe and contribute to growth and global rebalancing. It would also be in Germany’s national interest. But the Germans, to their own detriment, will not allow that to happen. The real question is: why is everyone else letting them do it? Writer, activist and film-maker Thomas Fazi is author of The Battle for Europe: How an Elite Hijacked a Continent – and How We Can Take It Back. He is due to address Social Justice Ireland’s annual policy conference in Dublin today