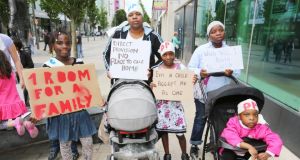 More than 200 people attended a rally in Limerick yesterday at which asylum seekers claimed they had fled persecution in their own countries only to become prisoners in Ireland.

Men, women and children carried placards that read: “You let me in, now let me live”, “No place to call home” and “Direct provision – open prison”.

Dorais Luimní – an NGO based in Limerick which works to support the rights of asylum seekers – is calling for an end to direct provision and the immediate closure of the Mount Trenchard facility in Co Limerick. The former convent caters for up to 55 adult men who sleep in dormitories, with up to 12 men sharing each room.

Earlier this week four of the residents at the hostel went on hunger strike. Gardaí were also called to the facility due to disturbances over conditions.

“As far as we are aware, only one person may still be on hunger strike but we are hoping he will be off it this week,” said Karen McHugh, chief executive of Dorais Luimní.

Business student Biswa Kafle (24) from Nepal, who has been waiting five years for a decision on his application, is living in Mount Trenchard. “It’s not a life living there. It’s an isolated place, it is . . . 40km from Limerick,” he said.

Mr Dzamara, who is living in Hanratty’s asylum centre in Limerick city, claimed asylum seekers were being treated like animals. “The system has rendered us useless. It must be changed. We fled persecution and did not come here to be put in prison again.”

Under the direct provision system, asylum seekers receive €19 per week from the State, but are not allowed to work or study. Some have spent up to 14 years in the system.

“We do not believe its a humane way to live,” said Ms McHugh.