Warning on health needs of Irish elderly in Britain 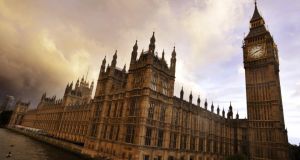 An all-party UK parliamentary group began an investigation last December into dementia services for Irish, Indian, Pakistani and black Caribbean communities, many of whom moved to Britain from the 1950s onwards. Photograph: Tim Ireland/PA

Elderly Irish suffering dementia are in danger of being ignored by the National Health Service and local authorities because both fail to recognise their culture and heritage, MPs and members of the House of Lords have warned.

“It is important to state that, as a non-visible minority, the needs of the Irish community are often overlooked by policymakers and service providers,” the All-Party Parliamentary Group on Dementia will say today.

The group began an investigation last December into dementia services for Irish, Indian, Pakistani and black Caribbean communities, many of whom moved to Britain from the 1950s onwards.

“It compares to just over a twofold increase in the numbers of people with dementia across the whole UK population in the same time period. Society is not geared up to deal with this increase,” it says.

During hearings, the group was told some GPs “stereotype” people from certain groups – the Irish are seen as “drinkers” and the Asians as “whingers” – which results in people being reluctant to go to their doctor, or “often not taken seriously” when they do.

Indian and Pakistani families are under more cultural pressure than their Irish or Caribbean counterparts to look after elderly relatives at home, even though in some cases they are faced with unmanageable dementia.

“The stigma and taboos surrounding dementia, assumptions that families ‘from ethnic minorities’ always ‘look after their own’ can increase the likelihood of social isolation,” warned the MP and peers.

‘Lack of awareness’
“Becoming isolated from the community removes potential sources of practical and emotional support for families living with dementia. It also compounds the lack of awareness of dementia among that community,” they went on.

Giving evidence to the inquiry, Charlotte Curran of the Federation of Irish Societies said the Irish in Britain have “a high proportion” of single elderly men and widowed women living alone, often with long-term illnesses.

“While this is recognised in the Asian community it is not recognised within the Irish,” she said.

Most “left a poor Ireland and faced discrimination when they came here to the UK,” said Ms Curran, who warned that the needs of the Irish “are often hidden” because they are white.