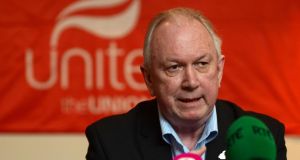 Jimmy Kelly, regional secretary of Unite, at the union’s press conference to announce rejection of the Croke Park II proposals. Public service staff represented by the union are the only ones to have so far also rejected the Haddington Road deal

Members of the Medical Laboratory Scientists Association voted in favour of the Haddington Road proposals by 62 per cent to 38 per cent.

The union had rejected the earlier Croke Park II proposals a few weeks ago.

Union ballot results over the last week or so mean the vast bulk of public service staff have now signed up to the proposed new deal.

A number of unions that decisively rejected Croke Park II such as primary teachers, nurses and doctors have now changed their stance. In the case of some – such as lower-paid civil servants – union members have gone against the recommendation of their union and backed the Haddington Road proposals.

The reason for the change of position would seem to be clear. While no one actually likes the cuts to earnings and/or working conditions set out in Haddington Road, they are more benign than those envisaged in Croke Park II. Many public servants seem to have been prepared to hold their nose and vote for Haddington Road rather than face the likelihood of the Government imposing even harsher measures under the financial emergency legislation it introduced several weeks ago – with all the industrial relations conflict that was likely to flow from such a development.

Public service staff represented by the Unite trade union are the only ones to have so far formally rejected Haddington Road and they now face having cuts imposed on them from next Monday.

If things stay as they are, the first implication for the 6,000 Unite members is that under the new legislation the Government can suspend increments due after the beginning of July. Unite has yet to decide whether to ballot for industrial action in the event of the Government unilaterally imposing cuts. Its public service representatives are due to meet today.

The situation in parts of the education sector remains unclear. The executives of the ASTI and TUI initially rejected the Haddington Road proposals without even putting them to a ballot. Last week there were indications both unions may arrange a vote when schools reopen in September.

As things stand, teachers in such unions will also lose out on their next increment, which in many cases is due in early September. If these unions subsequently sign up to Haddington Road it would be for the Minister for Public Expenditure and Reform Brendan Howlin to decide whether these incremental pay rises would be paid retrospectively.

If these education unions formally reject Haddington Road and the Government unilaterally imposes the harsher measures under its financial emergency legislation, there is a prospect of industrial action in schools from the autumn. However, before then it is likely that there would have to be a further ballot of members on this issue.

Overall, from its perspective the Government is in a far more comfortable place than it was two months ago after the collapse of Croke Park II when it seemed its whole public service pay strategy was unravelling.

Mr Howlin is confident that the Haddington proposals will deliver the €300 million in savings on the public service pay bill it is seeking this year and €1 billion by 2015. It is likely the bailout troika will be watching closely to see that these targets are reached.