Use of illegal drugs has nearly doubled since early 2000s

Cannabis, ecstasy and cocaine use at highest level since 2002 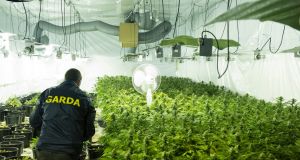 The most widely used illegal drug remains cannabis, with 28 per cent having used it at some stage in their lives in 2014/15. Photograph: Domnick Walsh/Eye Focus

Illegal drug use has almost doubled since the early 2000s, with cannabis, ecstasy and cocaine use at their highest since 2002, the latest figures show.

The most widely used illegal drug remains cannabis, with 28 per cent having used it at some stage in their lives in 2014/15, compared with 17.3 per cent 14 years ago.

These are the headline figures from the largest, regular study of its kind on the island, looking at illegal drug, and alcohol, use and gambling among adults. Some 7,005 adults over 15 were interviewed in the Republic, while 2,500 were interviewed in Northern Ireland.

Though the comparison figures focus on adults between 16-65, data for the 2014/15 study include interviews with adults over 64 for the first time, giving slightly lower rates overall, with 26.4 per cent of all over 15-year-olds having used illegal drugs at some stage. Some 24 per cent had used cannabis, 7,8 per cent used ecstasy and 6.6 per cent used cocaine, including crack, at some stage in their lives.

Measurement of drug use in the past month or year, however, is a more accurate indicator of prevalence.

Broken down by gender, some 13.4 per cent of males aged 15-24 have used an illegal drug in the past month, compared with 5.8 per cent of females in this age cohort.

1 Coronavirus: 396 more cases as public is urged to help protect ‘older and vulnerable’
2 The Sack of Balbriggan: The burning of a town that shocked the world 100 years ago
3 The FinCEN files: The billion dollar a month money trail
4 Lockdown measures and rising anger in Madrid as Covid takes hold again
5 Covid-19 cases among older people continue to rise sharply
Real news has value SUBSCRIBE