UN convention on disabilities will be ratified, says Finian McGrath 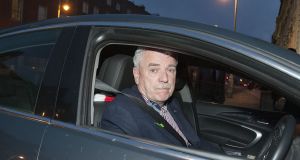 Independent TD Finian McGrath said he got the ratification into the programme for government. Photograph: Dave Meehan

The Government and Minister for Justice have promised the UN Convention on the Rights of Persons with Disabilities will be ratified “within six months”, according to the new Minister for the area.

Ireland signed the framework in 2007, but has not yet made it legally binding by ratifying the convention .

Finian McGrath, an Independent TD and the newly appointed Minister of State with Responsibility for Disabilities, said he got the ratification into the programme for government and got “a commitment from Frances Fitzgerald and from the Government that that will be ratified within six months”.

Mr McGrath was speaking at a launch by UN special rapporteur on the rights of persons with disabilities, Catalina Aguilar, on an Irish Human Rights and Equality Commission-ordered report about the convention’s implementation.

Ms Aguilar said it would be a “pity” if Ireland was “the last European country” to ratify it. Finland, the only other EU state which has not yet ratified, is understood to be about to do so.

Signatories to the convention guarantee to “protect and ensure the full and equal enjoyment of all human rights and fundamental freedoms by all persons with disabilities, and to promote respect for their inherent dignity”.

She said it seemed difficult to implement because it “challenges centuries of discrimination, exclusion and marginalisation” and ways of thinking about people with disabilities that were “deeply embedded” in our cultures.

Eddie Redmond, chief executive of the Irish Deaf Society, spoke using Irish sign language, which he said was not recognised in Irish schools. He said he hoped this would change with ratification of the convention.

Adrian Noonan, a self-advocate with Inclusion Ireland, which lobbies on behalf of people with intellectual disabilities, said people with disabilities could be treated like “second or third-class citizens”.

He said the continued criminalisation of sex with an adult with an intellectual disability made people with the disability “afraid to have this type of relationship”.

Turning to Ms Aguilar, Mr Noonan said: “The Government will say how great they are. They are not.”

The last major piece of legislation needed before the convention could be ratified – Assisted Decision Making (Capacity) Act – was signed into law in December 2015.

A spokeswoman for the Department of Justice said yesterday the outgoing government had approved the general scheme of a Bill to remove final barriers to ratification and enactment by the end of 2016.