Tyrrelstown residents ask State to step in to buy homes 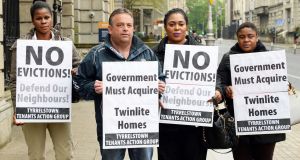 Residents of Tyrrelstown in Dublin who were served with notice to leave their homes after they were acquired by a so-called “vulture fund” have again urged the Government to find a solution to help them stay in them.

Some 40 tenants in the Dublin 15 area received termination notices in March.

In a submission to the Oireachtas Committee on Housing and Homelessness, the residents asked that the State acquire their homes and create an affordable mortgage scheme or rent the houses back through Fingal County Council.

They said there was already a precedent for this after the Government funded the purchase of 44 houses in Waterville at the end of last year from a private developer via Fingal County Council at a cost of €13 million.

“This will become a national issue for government anyway as over 47,000 homes are now owned by non-bank/vulture funds. Tyrrelstown is just first in line,” the residents said in a suspension.

They suggested an affordable mortgage scheme to facilitate the current tenants to purchase their homes, but said current schemes offered by Fingal County Council were too restrictive to allow them to do so in a short space of time, because they required an 8 per cent deposit.

The committee heard many of the residents were on the council’s housing waiting list.

One resident, Funke Tobun, said it was a very distressing situation for all those who had received the letters asking them to leave.

Reading the residents’ submission, she said: “We are part of the community of Tyrrelstown. Our children go to the local schools, take part in the local sports clubs. We have built a life here. We have sunk roots here and we consider Tyrrelstown our home.”

They had the support of the wider community including the local GAA club where their children played football.

Last month at the Residential Tenancies Board, the investment fund accepted that an eviction notice served on Ms Tobun and her husband, Ademola, also of Cruise Park, was invalid.

Gillian Murphy, another resident, told the committee her family had also been asked to leave their home. She had three children, aged five, four and two. One of her sons had recently been diagnosed with autism and she had been told that if her family left the area they would be taken off the list for services and would have to start from the bottom again.

Sinn Féin TD for Dublin Mid-West Eoin Ó Broin said there were ways for the State to facilitate the purchase of the houses and that the committee’s report next month should have “very clear recommendations” to deal with such crises.

If it did not, then the Tyrrelstown families and others coming down the line would also be entering into the homeless system.

Anti-Austerity Alliance-People Before Profit TD for Dublin West Ruth Coppinger said the Tyrrelstown area had been underserved by the State.

The people of the community were not asking for “handouts”, she said.

“They have been badly served.”