Tyrrelstown notices: ‘This is happening all over the place’ 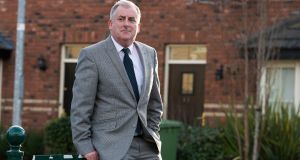 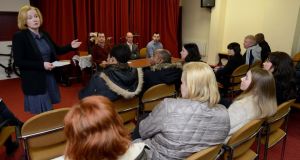 Socialist TD Ruth Coppinger addressing residents of Cruise Park estate in Tyrellstown, who are under a threat of eviction, at a public meeting in recent days. Photograph: Dave Meehan/The Irish Times

Like the cute, savvy kid in the AIB mortgage ad sussing out the neighbourhood in which his mother and father might buy a home, Liam thinks Tyrrelstown is just the business.

“It’s a nice, fun environment,” he says. “Pretty much everyone here is nice and tries to make you welcome.”

Liam (11) was born in Johannesburg (“Not a nice place,” he offers) and spent some years in Qatar, where his father worked in a hotel, before coming to the west Dublin estate.

In recent days, it has emerged over 60 families renting homes in the Cruise Park area were told their tenancies would not be renewed when their current leases expire on dates ranging from between a month and 112 days’ time.

There was no outward sign of collective anxiety in Tyrrelstown yesterday – no protest posters or calls to resistance.

The cluster of shops in the well-kept town centre includes a Lidl, a SuperValu and Net-Pol, catering for the area’s large central European population, as well as a betting shop, dry cleaners, several take-away restaurants, a pub, solicitor and McPeake auctioneers - the area’s only resident estate agent.

Like Liam, Joe McPeake thinks Tyrrelstown is a good place to live.

There are some 2,300 homes – a high density mix of apartments, townhouses, terraced and semi-detached homes laid out on winding roads. Though less than 10 years old, the place has a settled, mature feel about it.

Tyrrelstown was completed in 2007 and 2008, after the property crash had set in. The developer, Twinlite Developments, rather than try to sell the last of the units into a collapsing market, rented them.

The loans backing the development were sold recently to Goldman Sachs, who are now seeking vacant possession to sell the units.

Of the 2,300 homes, McPeake estimated that 1,800 to 1,900 are owner-occupied. Unemployment is low in the area, he says, largely due to there being several large-scale employers close by, among them Dublin Airport, the Blanchardstown centre and a number of established and expanding pharma and IT companies.

McPeake, who is not involved in Cruise Park but does manage 60 to 70 properties elsewhere in the area, believes the 60 families on notice to quit will be able to find alternative homes in Dublin 15, but not necessarily in Tyrrelstown itself.

However, he believes the combination of problems that led to the Cruise Park notices to quit are “the shape of things to come” elsewhere.

“This [situation] is driven by a shortage of accommodation. The problem is, everybody is talking about rents going up. The reason rents are going up is because of supply and demand.

“Yet it is cheaper to purchase a house - if you can get finance - than it is to pay rent at present. But you can’t get finance.”

The other half of the problem, as he sees it, is the low level of construction.

“The supply into the market from the builders is much lower than the market needs, and that is because of a number of reasons.

“The first is that the control of sites into the market is being controlled by a much smaller pool of players. The big developers who were there all ended up in Nama or a financial institution.

“The financial institutions have all now basically all sold off their loans and Nama is selling off the balance. All of those loans have gone basically to these venture capital funds.

“It’s a problem that’s been created, in particular, Nama’s desire to do away with Nama, to be able to say ‘Nama’s now gone, isn’t that great’, but what you’ve really done is transferred the whole stock of development land and a considerable number of private residential properties, that may be rented or may not be rented, into the hands of people outside the country.”

The notices to quit sent to Tyrrelstown families generated attention “probably out of proportion to the actual event”, says McPeake.

“People were told ‘We want to sell the house, we’re giving you your notice’. That is happening on an individual basis right around the country. The fact that [in Tyrrelstown] they sent a large number out at the one time, is a bigger problem. But this is happening all over the place.”