Trials ‘were for children’s good and did not damage’

Vaccines caused no harm, says doctor. One used them on own children 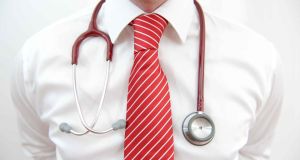 An internal Wellcome memo at the time stated: “You will appreciate that it is difficult to arrange meaningful trials of any medicinal product in young children, as is necessary in this case.” Photograph: PA

Medical professionals who oversaw vaccine trials at Irish mother and baby homes insisted the vaccines did no harm and were administered in the children’s best interests.

But no parental consent was sought for the trials. Doctors effectively granted each other permission to proceed in at least one of the trials.

Babies, almost all of them under 12 months and a small number of whom were either described at the time as mentally or physically “handicapped”, were used in the trials carried out on behalf of the British multinational pharmaceutical company Wellcome by two of Ireland’s most eminent medical scientists in the 1960s and 1970s.

Prof Patrick Meenan and Prof Irene Hillary, attached to the department of medical microbiology at University College Dublin, oversaw the Irish trials involving the three-in-one vaccine and its use in conjunction with the polio vaccine. But Prof Hillary insisted she did not regard them as trials. “I view them as investigations to improve things,” she said in a 1997 interview with me.

In late 1972, Wellcome wanted to do clinical trials of its DTP (diphtheria, tetanus and pertussis) vaccine containing a pertussis (whooping cough) component obtained by a new method. The company, since been subsumed into Glaxo Smith Kline, believed the theoretical advantages of the new vaccine would be that it would cause fewer reactions and there would be a considerable saving in production.

An internal Wellcome memo at the time stated: “You will appreciate that it is difficult to arrange meaningful trials of any medicinal product in young children, as is necessary in this case.”

The National Drugs Advisory Board gave Wellcome general approval in April 1973 for a new DTP vaccine to be used in clinical trials in Ireland. Soon after, a trial was carried out at two children’s homes in Dún Laoghaire: Bird’s Nest and the Cottage Home.

Two separate groups were used for the trial; 53 children in homes received the new vaccine, while 65 children in the wider community were given the existing vaccine. The records of the vaccinations in the children’s homes show that at least three of the infants vaccinated were either mentally or physically disabled.

None of those outside the homes who were vaccinated as part of the trial had disabilities.

The late Prof Meenan confirmed in a 1997 interview that he had presided over a number of trials at children’s homes. He referred to a controversy over similar trials in Australia between 1949 and 1970 which had outraged many people. He described the Australian reaction as “reading history backwards”.

He said he did not quite recall the 1973-1974 trial involving the Dún Laoghaire homes. “By that time I had pretty well pulled out. I was still head of the department at that time – it was run on a very loose rein. I might not have known what was being done there at the time,” he said.

Asked about involving children with mental or physical disabilities in such trials, Prof Meenan said: “We are talking about a quarter of a century ago. But I wouldn’t be too happy about using such children.”

Prof Hillary said she did not recall disabled children being used. “If I did, they were handed to me as suitable children (by the doctor at the home). None of them suffered and I also vaccinated my own children.” She insisted vaccinating disabled children would not have adversely affected them. “It would have been no harm to do them. A child with six toes or a congenital hip could be regarded as physically handicapped,” she said.

Dr Niall Webb, attached to the Bird’s Nest Home in 1973, also confirmed he had consented to the vaccination of a small number of disabled children.

“Things were very different in those days. There were a small number of retarded children, but there were a very large number of healthy children. It would not have done them any harm and these were not experiments.

“I gave permission,” he said. “Dr Hillary assured me they were not experiments and I did not even consult the board. I believe it was usual to use homes for such work in those days, but this was the only time we were asked.”

A total of 58 children, ranging from six weeks to four years, in five homes, were used in the 1961 trial carried out by Dr Meenan and Dr Hillary in conjunction with four scientists from Wellcome.

Children had six or seven injections if they were to be vaccinated against DTP and polio. The trial compared this with a combination of DTP and polio in four injections.