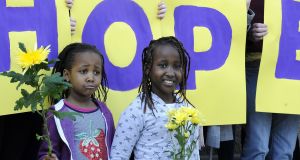 Stephanie (5) and Tatyana (8) N’Gang’a, take part in a protest outside the Department of Justice last year over the treatment of asylum-seekers . Photograph: Dave Meehan/The Irish Times

Government treatment of asylum-seekers remains “narrow” and “mean”, 10 months after the publication of a report on improving the asylum system, according to its author.

Dr Bryan McMahon, retired High Court judge and chair of the report working group, called for an immediate, once-off amnesty to any asylum-seeker in the system for more than five years, as “gesture of generosity...in the spirit of the 1916 celebrations”.

He was speaking at the publication of a report entitled Time To Act, by the Jesuit Centre for Faith and Justice, which highlights a lack of progress on the report. He was “disappointed” its 173 recommendations remained largely unimplemented.

There appears to be a ‘de facto’ implementation of the solution ’long-stay’ asylum seekers. About 1,400 people were granted the leave to remain last year compared with 700 in 2014. However there are still about 2,000 ‘long-stay’ people in the system.

In addition the number of asylum applications is growing putting increased pressure on the earlier stages of the system.

The working group also made a series of recommendations to improve life for the 5,000 or so people in direct provision centres, about one third of who are children.

“Regrettably,the living conditions and supports have not improved in any meaningful way,” said Dr McMahon.

The standout issues for people were the length of time they spent in the system and the fact they could not work.

Dr McMahon had presided over citizenship ceremonies since 2011, in which 98,000 people had been granted citizenship.

“I contrast the fearless generosity shown by the State in these ceremonies with the mean, narrow way in which other people and their children are corralled in a system that degrades and deprives them of basic dignity.”