12,000 people turned up at 4.15am in Phoenix Park to walk 5km for suicide prevention 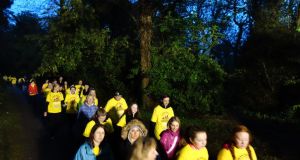 The 5km Darkness into Light walk/run, which kicked off at 4.15am on Saturday, was held at 80 locations in Ireland and around the world, and is believed to have attracted an estimated 100,000 participants. Photograph: Dara Mac Dónaill/The Irish Times

The 5km walk/run, which kicked off at 4.15am on Saturday, was held at 80 locations in Ireland and around the world, and is believed to have attracted an estimated 100,000 participants.

The first Darkness into Light walk was held in 2009 with 400 participants.

“Pieta House’s intention has always been to save lives and to change the social fabric and the conversation around suicide and self-harm,” said Joan Freeman, founder of Pieta House, this morning in Phoenix Park. “It’s been nine years and we’ve come a long way towards reaching that goal. However, people are still afraid to face the reality that they may know someone who’s at risk of suicide or self-harm.

“You, the people, are the most important component of all in the fight against suicide.”

From Wicklow to Washington, Chicago to Perth, friends, families, children and pets turned out to walk together for suicide prevention. An estimated 4,000 people walked in Melbourne and Perth, which were among the first cities to kick the morning off, followed by almost 1,500 people walking in London, Manchester and Glasgow. The final walks of the day will take place in New York, Toronto and Chicago where 1,700 people are expected to turn up in support of Pieta House.

In celebration of the theme ‘connecting’ for this year’s Darkness into Light walk, Dublin Bus provided a free shuttle service connecting Heuston Station to the flagship walk in Phoenix Park in the early hours of Saturday morning. Elsewhere around Ireland, local businesses showed their support by opening early and providing weary walkers with complimentary teas, coffees and refreshments.

Jim Dollard, executive director of Electric Ireland which supported this year’s walks, congratulated all participants around the globe, thanking them for their support.

“This year has been the biggest year yet and there’s no doubt that it has captured the imagination of Irish people at home and abroad, including in Electric Ireland, where a large number of our staff walked with thousands of other people in venues across the country this morning.”

Pieta House is a suicide and self-harm crisis organisation and works with ten centres across the State. Pieta House is set to open its first overseas centre in Queens, New York this summer as it begins to reach out to members of the Irish diaspora who may be in need of support.