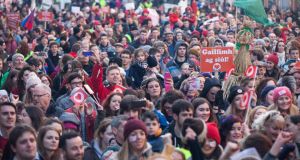 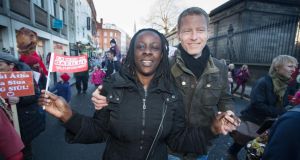 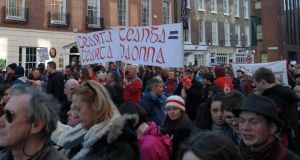 A section of the crowd listens to the speeches on Molesworth St. Photograph: Éanna Ó Caollaí/The Irish Times 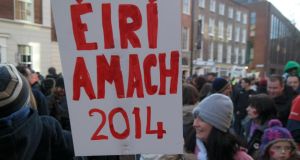 Thousands took to the streets of Dublin city centre this afternoon to protest against the treatment by Governments north and south of Irish-language speakers and Gaeltacht communities.

Organisers said some 10,000 people took part in the march which started at the Garden of Remembrance in Parnell Square and marched down O’Connell Street before gathering for a rally in front of Dáil Éireann.

The crowd, with many wearing red, heard from a number of speakers who condemned the lack of public services available in Irish.

Billed as a celebration of Irish on the streets of Dublin, Lá Mór na Gaeilge attracted participants from all parts of the island and was the largest such demonstration since the 2005 campaign to elevate the status of Irish in the European Union.

Citing the decision in December by language commissioner Seán Ó Cuirreáin to resign in protest over the failure by Government to implement legislation protecting the rights of Irish speakers, Conradh na Gaeilge general secretary Julian de Spáinn said Irish language speakers were “red with rage” at how speakers are being treated by the State.

“We will continue to campaign our public representatives until we achieve fairness and equality for the Irish-speaking and Gaeltacht communities throughout the island of Ireland. ”

Lá Mór na Gaeilge was organised by Conradh na Gaeilge and marks the beginning of a campaign to seek equal treatment for Irish language speakers north and south.

“We are planning a march on Sunday week in Conamara and in Gaoth Dobhair to coincide with the resignation of the Coimisinéir Teanga and on the 12th of April we are planning a large demonstration in Belfast,” Mr de Spáinn said afterwards.

“In addition we are going to focus on the local and European elections. There is a lot to do but today was just a beginning.”

Mr de Spáinn said Conradh na Gaeilge had responded to an offer of a meeting with Taoiseach Enda Kenny and was awaiting a response from the Taoiseach’s office.