'The Troubles were bad. Life is worse now.'

Political issues dominate the news in Northern Ireland, but in west Belfast people are more concerned with cuts, rampant poverty and unemployment 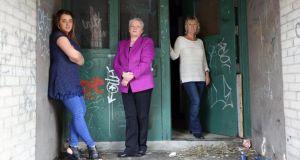 Ciara Dunlop, Rene Crawford and Greta Doherty outside a block of derelict flats on the Lenadoon estate in west Belfast. Photograph: Stephen Davison/Pacemaker

Bernie says she wouldn’t survive without the group. Tara says it’s her lifeline. Debbie says that without it she has nothing. Paula says it keeps her going. The Women’s Group is part of the Glen community complex in west Belfast. Ciara Dunlop and her colleague Greta Doherty have worked with hundreds of women who have come through the group.

“We know when someone is hungry by the way they gulp back the cup of tea we give them,” Dunlop says. “We try and give whatever support they need.”

What kind of problems do the women have? She doesn’t hesitate. “Debt, bereavement, suicides, drugs and antisocial behaviour – and often they are dealing with several of these at once.”

Doherty shows me the cupboard that they keep discreetly stocked with basic foods, so that anyone who needs to can help themselves. “When people come in here they are often very emotional and vulnerable,” she says. “One of the counsellors who refer people to us was talking to me about why there was such a big upsurge in demand. She said to me, ‘Greta, it’s poverty.’ ”

Worry. That is the word that keeps coming up when the women talk about their lives. They talk about being worried sick. “We had the conflict, and that was bad, but I never saw anything as bad as how things are now,” Doherty says.

“There’s sky-high unemployment and lack of education, which is now inherited within families. Marriages among people of all ages are under pressure. A lot of domestic violence. Parents shouting and screaming at their kids, using credit cards and going to money lenders to pay the bills.

“People have lost their homes because they couldn’t pay the exorbitant mortgages they were given on the basis of part-time jobs that came to an end, and now greedy bastards of landlords are putting pressure on them for their rent.”

Dunlop worked voluntarily for several years before she got her current part-time job at the centre, and now she is facing redundancy.

“I understand the women we meet. I was originally referred here by a health visitor. I had postnatal depression, and I had escaped from a man who was a monster, full of power and control,” she says.

“I did a parenting course and then a health and social-care course, through the Women’s Resource and Development Agency, and other accredited training. My eyes were opened: it was a mind, body and soul transformation. I love my job, but by February next year I will be on protective notice.”

The women point out that cutting funds for the sort of work they do is counterproductive. “In the last year our work enabled at least 10 children to have come out of care. It costs £100,000 to keep a child in care for a year, and just £60,000 runs the women’s group,” Doherty says.

The community complex is in a fine modern building in Lenadoon, one of the outermost housing estates in west Belfast, high up on the side of the Black Mountain.

At the start of the Troubles, Catholics from Rathcoole on the northern edge of the city moved in, displacing Protestants who moved into houses in neighbouring Suffolk. The peace line between the two areas was, until the late 1990s, one of the most volatile in Belfast.

Antisocial behaviour was rife. Crowds used to gather to watch the joyriders, as they were then known. Now it is called death driving. Lenadoon’s population is currently about 15,000; Suffolk has fewer than 1,000 residents.

Funds for the complex came from peace funds and Atlantic Philanthropies. The community work carried out in it has been funded by various government departments, the European Social Fund and other sources. All of its funding sources have either been cut, come to an end or are under threat.

The purpose-built computer suite and training rooms have lain empty and silent since funding stopped in March, disappointing the 300 unemployed or otherwise economically inactive people who had put their names down to do courses.

“People talk about a peace dividend, but things are definitely getting worse in west Belfast,” says Renee Crawford, who has been a community campaigner for several decades. “The community sector is being decimated just when people are in urgent need of the kinds of support it can offer.”

The sectarian divide does not apply. “We are seeing people coming to us from places like the Shankill Road because organisations they had there have already closed. We know there are going to be further cuts to welfare entitlements and public services, whether they are made by Stormont politicians or Westminster ones. People are already struggling. How are they going to survive with what is coming down the tracks towards them?”

Having campaigned for “rabbit hutch” flats in blocks to be replaced by houses, and against the selling off of public housing during the Thatcher years, Renee says that if a “bedroom tax” is introduced she can see the same cycle of campaigns having to start up again. “As it is, people whose homes were repossessed are back on the housing list, and there is a shortage of houses and even space on which to build new ones.”

This tax would see rent supplement cut for those living in homes that have spare bedrooms, forcing many people to seek smaller flats. The axing of the social fund, which provides emergency assistance, will have a particularly severe impact on women fleeing domestic violence.

“This is a really fragile time,” Crawford says. “You can see trouble beginning to flare up again along the peace line. There is a lot of instability and a sense that the politicians are completely disconnected from these communities. People aren’t even bothering to vote.”

Crawford is one of those who set up the Suffolk Lenadoon Interface Group, a social-economy business right on the peace line. There’s a hairdresser, a couple of shops, a chemist, a post office, a childcare facility and a cafe. To discourage trouble there is neither an off-licence nor a late-night fast-food outlet.

There is a door from Suffolk and a door from Lenadoon; upstairs is a community counselling service used by people from both communities. There are sessions to help people at risk of suicide. Although it is more in demand than ever, its funding is also due to end next spring.

“The issues are the same for people on both sides of the peace line. There is a lot of panic,” says director Lorraine Morrissey. “The lack of decisions about welfare cuts creates anxiety and depression. We try to create solid ground for people, but that is very difficult, because the whole community is on shifting sands.”