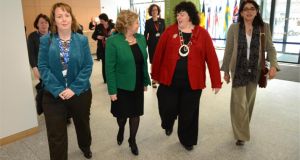 Ten children in State care have been placed in facilities abroad at a cost of €3.5 million due to a lack of specialised care places here.

The practice has been criticised by campaigners, who say these services should be available in Ireland. Health authorities however say children placed abroad represent a tiny proportion of more than 6,000 in care, the vast majority of whom are in foster care.

In addition, a further 16 highly vulnerable young people who require special care places in Ireland do not have access to this kind of intensive support they require because there are not enough places to meet demand.

These special care places are designated for young people whose serious emotional and behavioural problems pose a major risk to their health, safety or welfare.

Figures released by the Health Service Executive to The Irish Times show these young people are waiting, on average, 65 days for a place.

“These are the types of cases we read in the child death reports and surely we have learned by now,” she said.

Ms van Turnhout also suggested that as many as 40 children who required special care may also need such places, as official waiting lists only included those formally identified as being in need of intensive support.

“Given the lengthy process and appropriate safeguards to actually get on the list, I would have felt that the HSE had plenty of advance notice of each case and so I still do not understand why there is such a long waiting time.”

In a statement, the HSE said any children waiting for special care places were in receipt of other forms of therapeutic support. It added that all referrals were reviewed by a multi-disciplinary and independent referral group.

“Decisions are made based on objective criteria and legal principles underpinning special care provision. The management of the number of places available is not undertaken by the referral group. The governance of the special care units, including capacity issues, is managed separately by the national management team for special care services.”

The HSE also said it was implementing a major programme of reform in preparation for the establishment of the new Child and Family Agency, which is due to take over responsibility for most children’s services early next year. The reform programme includes increasing the number of special care places.

Eight young people in care abroad are St Andrew’s, Northampton, a specialist service which provides care and support to people with conditions ranging from mental health problems to autism. The cost for each child is about €375,000 a year.

Another child has been placed in St Mary’s in Scotland, a residential service for children with emotional and behavioural difficulties. The cost is €414,000 year. Boystown in Nebraska, US, is another centre which has been used by social services in Ireland. One child is currently there, at a cost of €133,000 a year.

The HSE has pledged to develop services to ensure that no Irish child should need to be sent overseas for a general care placement. However, figures show authorities are still required look abroad to find specialised treatment programmes for some children with difficult or challenging behaviour.