Opinion: Proposed legislation silent on those who use foreign commercial surrogates 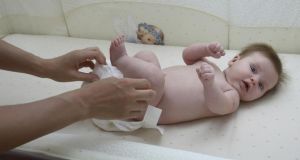 ‘No one wishes to leave children stateless or parent-less, people understandably desperate to have a baby will seize on any such loophole.’ Photograph: Getty Images

They are a special subclass of birth mothers who sign contracts to carry, give birth to and hand over babies to commissioning parents. They are essential to the profits Circle makes from women’s bodies and infertile people’s grief.

Mr Hutchison strongly emphasised the altruistic motivation of these “carriers”. True, these are probably empathetic women who wish to help childless couples.


Three mothers
Surrogacy splits motherhood into bits. A child potentially can have three mothers: the genetic mother, if the sale of human eggs is involved; a birth mother; and a commissioning mother. Not to mention potentially two fathers, if sperm is sold.

None of this is without risk. In the notes on Minister for Justice Alan Shatter’s proposed Child and Family Relationships Bill, which will deal with surrogacy, there is a chilling passage.

Women intending to be surrogates must already have at least one child “of which she has custody”, as “it may be desirable to ensure that if complications should compromise the intending surrogate’s future fertility this should not have the effect of forcing her to be childless”.

Germany has banned surrogacy outright. Why? Its courts decided no human being should be the subject of a contract. According to a 2010 EU report, surrogacy is banned in France, Austria, Switzerland, Sweden, Norway, Italy and Bulgaria.

Alan Shatter would probably say his Bill outlaws commercial surrogacy and only altruistic surrogacy would be allowed. Perhaps he should look at a documentary called Breeders: a Subclass of Women? from the US-based Centre of Bioethics and Culture.

In it, women who volunteered to act as surrogates talk about the utter devastation their altruism caused them. One of the women ended up applying for custody, and gained access to her child. At the age of five her daughter said: “We have the same hair and the same eyes. Why did you give me away and keep them [her other children]?”

The UK allows only altruistic surrogacy. Surrogates may claim only “reasonable expenses”. According to Cots, a reputable UK voluntary surrogacy agency, acceptable direct costs paid to the surrogate range between €14,000 and €18,000.

To an Indian woman or, indeed, a poor Irish woman, these sums are not negligible. The proposed legislation is silent on those who would seek to use foreign commercial surrogates but in response to a query the Department of Justice said that while the intention was to ban such practices, “the best interests of the child will also have to be considered, irrespective of any breach of that ban by the commissioning parents.”

While no one wishes to leave children stateless or without parents, people understandably desperate to have a baby will seize on any such loophole.


Left in limbo
Strangely, the Adoption Authority currently refuses to recognise the adoption of babies from Mexico, even though it leaves the child in limbo, because there were concerns related to Mexico’s compliance with the 1993 Hague Convention on Protection of Children and Co-operation in Respect of Intercountry Adoption.

Presumably the fear is that if one such adoption were recognised it would open the floodgates. But why are different standards to be applied to surrogacy?

Well-nigh insurmountable obstacles are being placed in the way of those who wish to adopt even from Hague Convention countries. These obstacles are fuelling the demand for surrogacy.

Modern-day adoption takes children who cannot be cared for by their families and tries to find families for them. It is open and transparent. Surrogacy brings children into existence designed to meet adults’ need to be parents. The two could not be more different

They have this in common, though. In the 1950s, when Philomena Lee’s son Anthony/Michael was forcibly adopted, birth mothers were told it was in the child’s best interests. There was absolutely no recognition that the child might suffer grief and no one cared what the birth mother would experience.

Everyone understands the driving hunger to have a child, the most natural hunger in the world. But in the 1950s it drove women in the US to take children from Irish mothers. If Circle Surrogacy has its way it will, today, allow Irish women to take babies from mothers in the US.

Alan Shatter’s legislation on surrogacy would allow birth mothers and in some cases genetic mothers to be wiped out of the picture, probably not even acknowledged on birth certificates. In 40 or 50 years’ time will we be filled with the same horror at that proposal as we are today about the forced adoptions of the past?