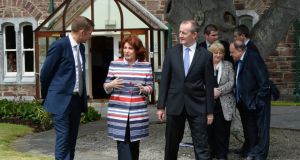 A close observation unit, community training and practical services are being put in place in response to Kerry’s suicide problem.

Suicide rates have soared in the county in recent years with the vast majority of inquests at coroners’ courts in Kerry now dealing with self-inflicted deaths, most of them males, and many – though by no means all – of them young.

Kerry recorded the highest rates of suicide in the country each year between 2009 and 2011, according to the latest data available from the Central Statistics Office.

The high numbers are believed to have continued in 2012, although a direct appeal by the Tralee teenager and cancer victim, the late Donal Walsh, to young people to think twice before taking their own lives has had a beneficial effect in the past few months, coroner for Kerry South Terence Casey believes.

Response plan
Minister of State at the Department of Health Kathleen Lynch yesterday launched a new suicide response plan by the HSE that brings together dozens of community and health organisations.

Speaking at the opening of the new Console centre in Tralee, Ms Lynch said the aim of the Kerry Suicide Response Plan was to raise awareness of supports available to people at times of crisis and distress.

It was also giving “practical help” and “co-ordinated support” to friends and families affected by suicide.

Response units that bring together nurses, community workers, clergy and gardaí have been set up in larger Kerry towns to respond quickly to a death by suicide and provide help for the bereaved.

Integrated services
The HSE’s Kerry area manager, Michael Fitzgerald, said international and national evidence was that “integrating services could reduce suicide and improve the wellbeing of the population in Kerry.”

The new initiative involves 27 agencies. A four-bed close observation unit at the acute mental health unit at Kerry General Hospital is to be put in place, Ms Lynch said.Several social workers, occupational therapists and mental health nurses are also in place or about to be appointed.

Training is being made available for communities and individuals to help identify those at risk.

Covid-19 will ‘spiral out of control’ if we don’t stop people mixing in Dublin’s bars and restaurants, says NPHET expert 12:58
Coronavirus: Dublin hospitals under ‘significant pressure’ as county set for Level 3 12:00
Infant hurt after scrambler crashes into stationary quad in Dublin 09:40
Trump envoy to Northern Ireland warns against hard border 08:48
Man due in court over robbery of wheelchair user in Cork 08:06