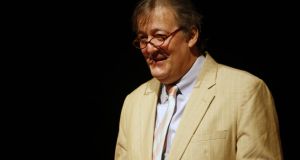 Comedian Stephen Fry told Gay Byrne that he considers god to be “utterly evil, capricious and monstrous” should he exist. Fry makes the remarks during his appearance on the broadcaster’s The Meaning of Life programme. Photograph: Simon Annand/The Irish Times

Comedian and writer Stephen Fry has provoked a strong reaction to his comments on the notion of god, whom he said he would consider “utterly evil, capricious and monstrous” should he exist.

In a brief clip teeing-up his appearance on Sunday’s The Meaning of Life programme with Gay Byrne, Fry unleashes an invective on the notion of an all-seeing, all-beneficent creator of the world.

Denouncing the idea of entering heaven “on his terms”, Fry seethes: “How dare you create a world in which there is such misery that is not our fault? It’s not right. It’s utterly, utterly evil. Why should I respect a capricious, mean-minded, stupid god who creates a world which is so full of injustice and pain?”

The clip released by RTÉ, and which runs to just over two minutes, has had over one million views on Youtube attracting widespread reaction on Twitter, mostly positive.

“I would say: Bone cancer in children? What’s that about?” Fry tells Byrne, when asked how he would react should he find himself outside the proverbial pearly gates of heaven.

“I wouldn’t want to get in on his terms. They are wrong,” Fry says.

“Because the god who created this universe, if it was created by god, is quite clearly a maniac, utter maniac. Totally selfish. We have to spend our life on our knees thanking him?! What kind of god would do that?”

Fry, who is widely considered an atheist but has in the past said he preferred the term humanist, told Byrne his views would be less harsh if he were faced with a pantheon of Greek deities, as he said they never pretended not to be capricious or unreasonable. “They didn’t present themselves as being all-seeing, all-wise, all-kind, all-beneficent,” he said.

Fry’s scorn, rather, was reserved for the concept of monotheism and a god who designs a cruel environment in which to live.

“Yes, the world is very splendid but it also has in it insects whose whole lifecycle is to burrow into the eyes of children and make them blind,” he says. “They eat outwards from the eyes. Why? Why did you do that to us? You could easily have made a creation in which that didn’t exist. It is simply not acceptable.

“It’s perfectly apparent that he is monstrous. Utterly monstrous and deserves no respect whatsoever. The moment you banish him, life becomes simpler, purer, cleaner, more worth living in my opinion.”

The Meaning of Life interview will air on RTE 1 at 10.30pm on Sunday.