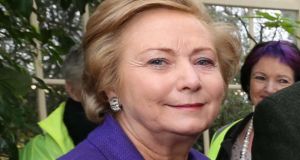 Minister for Justice Frances Fitzgerald: has ruled out providing employment rights for asylum seekers or an amnesty for those in the system. Photograph: Colin Keegan/Collins.

Asylum-seeking families should be moved out of the direct provision system and allowed to access self-catering accommodation as soon as possible, the Irish Human Rights and Equality Commission has urged.

In a new policy paper, the State body tasked with protecting human rights has expressed alarm at the length of time people seeking refugee status are spending in the asylum system.

More than 4,000 asylum seekers – including 1,600 children – have spent an average of four years living in direct provision. Many have challenged refusals to recognise them as refugees and are waiting for their cases to be heard in the courts.

The commission has issued 10 recommendations aimed at informing the work of a new Government working group which is reviewing the direct provision system. Among its key proposals are:

l Asylum seekers who have not yet received a decision on their status – on either first instance or appeal – should be allowed work and access regular social welfare benefits if they have been living in direct provision for a period of between six and nine months;

l The State should consider giving leave to remain to asylum seekers whose deportation orders cannot be implemented, while it should give “serious consideration” to settling legal cases which are subject to long delays;

l Residents should have the right to prepare and cook food appropriate to their culture, diet and individual needs during time spent in the direct provision system;

l The weekly allowance for asylum seekers – now €19.10 for adults and €9.60 for children – should be increased to a “realistic amount” that ensures dignity, respect and autonomy for individuals.

Many of the commission’s proposals are at odds with the views of Minister for Justice Frances Fitzgerald.

While she has acknowledged the need for reforms to the wider system, Ms Fitzgerald has ruled out providing employment rights for asylum seekers or an amnesty for those in the system.

Ms Fitzgerald’s colleague Aodhán Ó Riordáin, Minister of State at the Department of Justice, however, supports extending employment rights to asylum seekers after a period of time.

Ireland is one of two EU states that prohibits asylum seekers from working, regardless of how long then spend in the asylum system.

Emily Logan, chief commissioner, said the aim of the commission’s policy statement was to add the voice of the commission to the existing body of evidence around people living within the direct provision system for long periods of time.

“It is the commission’s view that the system of direct provision is not in the best interests of children, has a significant impact on the right to family life and has failed to adequately protect the rights of those seeking protection in Ireland,” she said.

“If the current system continues to be used, it should be only for the shortest possible time, in keeping with human dignity and autonomy and in accordance with the highest safeguards of rights.”

Even though private companies operate the accommodation centres for asylum seekers, she said the commission’s recommendations focused on the “State’s accountability as duty bearer, answerable for the observance of human rights”.

A Government working group chaired by former High Court judge Bryan McMahon is reviewing the operation of the direct provision system. It is due to issue a report by next Easter.