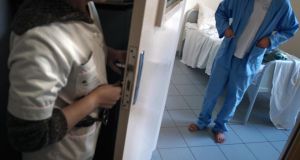 The HSE has pledged to develop services to ensure that no Irish citizen should need to be sent overseas for a care placement. Photograph: Jean-Philippe Ksiazek/AFP/Getty Images

Irish authorities have been spending about €3 million a year on facilities abroad to provide care for vulnerable young people due to a lack of specialised services here.

The issue of care abroad has been the focus of attention after a judge on Tuesday granted a young Irish woman’s plea for her return to Ireland after being detained for more than 20 months in a specialised psychiatric unit in England against her wishes.

The 18-year-old woman, who has a borderline personality disorder and who has tried take her own life, is understood to have returned to Ireland on Wednesday and will reside in a psychiatric facility on a voluntary basis.

She has spent almost all of the last four years in various psychiatric units in Ireland and England.

Eight young people were placed in St Andrew’s, Northampton, a specialist service which provides care and support to people with conditions ranging from mental health problems to autism. The cost for each child is about €375,000 a year.

Another child at the time was placed in St Mary’s in Scotland, a residential service for children with emotional and behavioural difficulties. The cost was €414,000 year.

The practice of sending vulnerable young people abroad for treatment has been criticised by campaigners, who say these services should be available in Ireland.

The HSE has pledged to develop services to ensure that no Irish citizen should need to be sent overseas for a care placement.

However, latest figures show authorities are still required to look abroad to find specialised treatment programmes for some children with difficult or challenging behaviour.

Health and social authorities, however, say children placed abroad represent a tiny proportion of the thousands of young people in the care or health system.

In delivering his ruling, Mr Justice Séamus Noonan said such costs would have afforded a purpose-built unit for her here.

When asked whether the HSE’s handling of the case would be reviewed in light of legal expenditure, the executive released a brief statement. It said it involved “difficult and complex circumstances” and was subject of oversight by the courts.

“Patients who require specialised treatment not available in this country can be referred to mental health services abroad where clinically indicated. Patients being treated abroad often have a complex and broad range of conditions,” the statement said.

The case itself was before the courts over a number of months. Last March, the High Court directed an arrangement should be put in place for her return to Ireland by June 12th last.

The HSE subsequently brought further proceedings arguing her circumstances had changed since the March order of Ms Justice Bronagh O’Hanlon.

Those circumstances included a view of some doctors that she could not be kept safe in the Irish services and should remain in the UK unit, where high levels of security could be put in place.

1 How one couple’s weekend away resulted in 30 Covid-19 cases
2 Taoiseach tells TD to ‘cop on’ over criticism of contact tracers asking about pubs
3 Miriam Lord: Government’s latest comedy of errors offers little to laugh about
4 ‘Mathematics seems too often to be about learning rules’
5 Coronavirus: 429 new cases as vigilance urged amid rises across the country
Real news has value SUBSCRIBE