State accused over violence against women 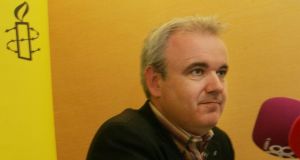 Ireland’s reputation for working to stop violence against women around the world is not replicated at home, Amnesty International has claimed.

The human rights agency warned of problems around prison conditions for young offenders, violence against women and girls and a lack of clarity over Ireland’s abortion laws.

Colm O’Gorman, executive director of the group’s Irish division, claimed the Government had failed to act on pledges committing itself to do more to protect women.

“Ireland’s strong international track record of working to reduce and prevent violence against women and girls is not replicated at home,” he said.

“One in five women in Ireland who have been in a relationship say that they were abused by a current or former partner.

“Yet Ireland is in the minority of countries in Europe that have not signed the Council of Europe Convention on Violence Against Women and Domestic Violence, despite committing to do so at a meeting of the UN Human Rights Council in March of last year.

“The Government can strengthen protections in Ireland for women and girls living in fear of violence by signing and ratifying this treaty.”

Amnesty also found that the death of Indian dentist Savita Halappanavar in October last year exposed a lack of clarity in legislation and regulations around access to abortion when a woman’s life is at risk.

New laws on the contentious issue have been debated for three days at the Oireachtas Health Committee over the last week.

Mr O’Gorman called for the legislation to support the need for rapid response by medics when a woman’s life is in danger.

“In the proposed legislation, the Government must ensure that the interpretation of ‘real and substantial’ risk to their lives guarantees that women will not be denied timely care,” he said.

“The timeframes for review procedures are too long and the clauses on conscientious objection are too vague.

“These have to be reviewed.

“The proposed 14-year sentence for a woman or doctor obtaining an abortion must be revoked.”

Amnesty said that until Ireland’s laws allowed for abortion in cases of rape and incest, risk to a woman’s health, or cases of fatal foetal abnormality, they would be out of line with international human rights standards.

The agency’s annual report focused mainly on the war in Syria and warned that the international community was failing millions of people forced to flee their homes by conflict, particularly in the Middle East state.

“The failure to effectively address conflict situations like Syria is creating a global underclass of refugees,” Mr O’Gorman said.

“The rights of those fleeing conflict are unprotected.”