Squatters from around the world gather in Dublin

Organisers say there is a ‘blossoming community’ of squatters in Ireland 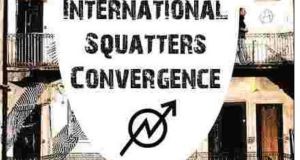 Squatters from around the world have been gathering in Dublin for the weekend long International Squatters Convergence.

Squatters from around the world have been gathering in Dublin for the weekend long International Squatters Convergence.

A weekend of music, film, yoga, talks, legal workshops, and “perhaps some overthrowing of the state” is under way in the Smithfield area of the city.

Squatters from Italy, the UK, and France, will discuss various issues on squatting including a talk from Zone d’Aménagement Différé, or ZAD, who will share their experiences of occupying land outside Nantes, which has been earmarked for the possible construction of a new airport.

According to the organisers, there is a “blossoming community” of squatters in Ireland and the event in Dublin is a chance for people to share their knowledge and experiences.

With a heavy focus on a DIY ethos, there will be workshops and discussions on the history of squatting in Dublin, community gardens and how to deal with the police.

There will also be a walking tour of Dublin with a focus on squatting and housing action.

Tomorrow will coincide with the International Day of Action for the Decriminalisation of Abortion and those attending the convergence are to march in support and will offer information about accessing abortion from Ireland.

There will also be events tomorrow and Sunday at Seomra Spraoi, an anti capitalist not for profit collective in Dublin city centre.

There is no strong history of squatting in Ireland, mainly due to strong property rights in favour of owners.

He said there was no real unity in today’s housing movements, apart from the Housing Action Group, set up by Ruth Coppinger of the Socialist Party.

The last significant movement in Dublin was the Housing Action Committee which protested against housing shortages in Dublin city in the 1960s.

Since the property crash, there have been occasional occupations of empty houses in ghost estates or commercial buildings.

Squatting in Europe differs depending on the country.

There is a long tradition of squatting in England even though it has been criminalised since 2012.

While squatting is illegal in Italy, there are many self governed social centre (centri sociali) around the country with many well known Italian punk bands gravitating around the social centre scene.

Berlin once had a thriving squatting scene with art studios, performance spaces, cinemas and newspapers.

In Ireland, a person can claim squatters’ rights, also known as adverse possession, if they are the sole continuous occupiers of a property for a period of 12 years.

The owner must have lost the right to the land or property either by being dispossessed or by having discontinued possession of the land, and there must be continuous and physical occupation by the squatter.

Participants at the convergence are urged to bring sleeping bags and tents, though there are not any specific requests to bring bongo drums.

The exact location of the convergence is not public as participants will have to follow the squatter symbols near the Cobblestone pub in Smithfield to find their way to the event.