Sharp divisions remain over attitudes towards minorities such as asylum seekers 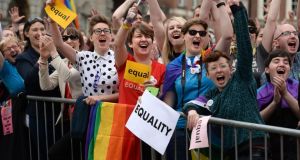 Celebrations in the courtyard at Dublin Castle in May after results of the Referendum on Marriage Equality were announced. Public perceptions of Ireland as a leader on human rights issues rose in the wake of the referendum. Photograph: Dara Mac Dónaill

Public perceptions of Ireland as a leader on human rights issues rose significantly following the referendum on same-sex marriage, a new poll suggests.

A total of 41 per cent viewed Ireland as a leader in Europe on human rights at the time, while 40 per cent saw the country as a standard-bearer for equality.

Following the vote in favour of same-sex marriage, the figures increased to 54 per cent and 55 per cent respectively, based on a separate poll conducted in June. However, the poll – based on a national sample of 1,000 adults – gives contrasting views over the rights of minorities.

However, 54 per cent believe asylum seekers should not have a right to work, housing or education until they are granted status. A similar proportion do not think prisoners should have the same rights as everybody else, while one in three believes it is acceptable for shopping centres and pubs to refuse entry to members of the Traveller or Roma community.

Chief commissioner Emily Logan said the poll showed Irish people had a strong engagement with human rights and equality issues. In the case of asylum seekers, she said Ireland was one of the few EU jurisdictions that did not allow asylum seekers the right to work.

“These limitations, which are imposed by the State itself, can ultimately influence public perceptions of asylum seeker rights,” she said.

Other data indicates that many believe human rights are not respected within the health care system. More people (44 per cent) believe that patients and users of health services do not experience respect for their dignity, compared to those who do (37 per cent).

Opinion was divided on a person’s ability to achieve their potential in Irish society. A total of 35 per cent believe prejudice, discrimination or neglect limited potential, compared to 38 per cent who believe it did not. Women were more likely to agree that potential could be limited by discrimination.